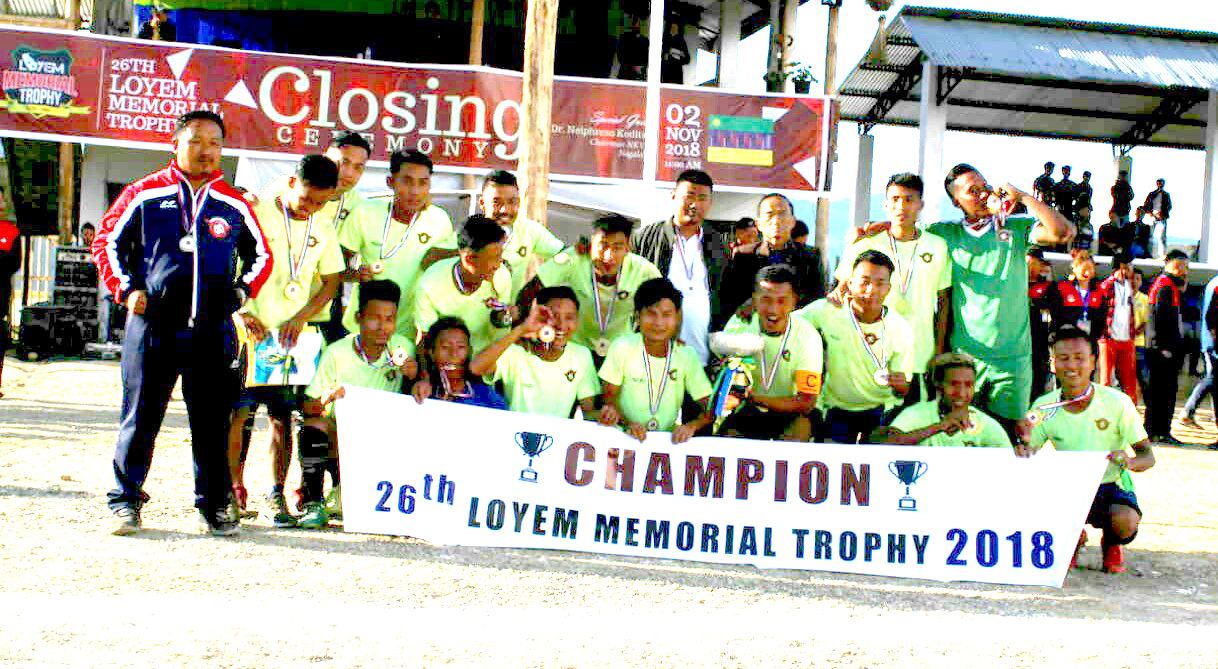 Tuensang, November 2: Nyenshen FC emerged as champions of the 26th Loyem Memorial Trophy with an emphatic 4-0 win over defending champions Sangzi FC on Saturday.
The final played at the Loyem Memorial Ground on Saturday saw a capacity crowd cheering their lungs out as the defending champions Sangzi FC, seeking to reclaim the trophy, started well with their midfielders pressing towards the Nyenshen goal early on.
However, Nyenshen FC defence led by Captain Olando stood strong like a wall and thwarted their attacks. And one such defending led to a counter-attack in the 10th minute with Kakhevi, from the left flank, giving a through ball to Rabindra who did superbly to get the ball into the back of the net.
In the dying minutes of the first half, Kakhevi burst through the last line of defense and looked set to score when he was tackled inside the box by Sangzi FC captain Francis. The referee pointed to the spot. The subsequent penalty however was saved by the Sangzi FC goalkeeper who was exceptional throughout the half. Minutes before, he had made a superb save keeping out Imlong Chaba’s power shot.
But there would be no stopping Nyenshen FC on Saturday as three minutes into the second half, Aloumai doubled the lead.
Sangzi FC’s morale took a hit when captain and hero of last year’s campaign, Francis was forced to come off in the 68th minute owing to an injury he had seemingly collected in the first half.
Kakhevi’s all-round performance was rewarded when he converted from the spot in the 83rd minute. The rout was completed when Laiwang, who had just come in as a substitute, scored in the 89th minute.
Their all-round performance saw Nyenshen FC deservedly collect the winning prize of Rs. 2,10,000 along with the trophy, certificates and medals as champions of the 26th Loyem Memorial Trophy 2018.
Sangzi FC were awarded Rs. 1,10,000 along with certificates and medals as runner-up. Meanwhile, Hügel Hifliers FC were awarded the most promising team which came with a prize of Rs. 15.000. Semi-finalist Vetao Aye FC and DEF Tsg received Rs. 25.000 each.
The Golden Boot was awarded to Johny of Sangzi FC for his 9 goals in the tournament. He received Rs. 10,000 along with certificate and medal.
Goalkeeper of Nyenshen FC Ikiho conceded only 2 goals throughout the tournament and was awarded the Golden Glove. He walked away with Rs. 10,000 along with trophy and certificate.
The Golden Ball was awarded to Imlong Chaba of Nyenshen FC for his all-round performance throughout out the tournament. He received Rs. 10,000 along with certificate and medal. (Page News Service)