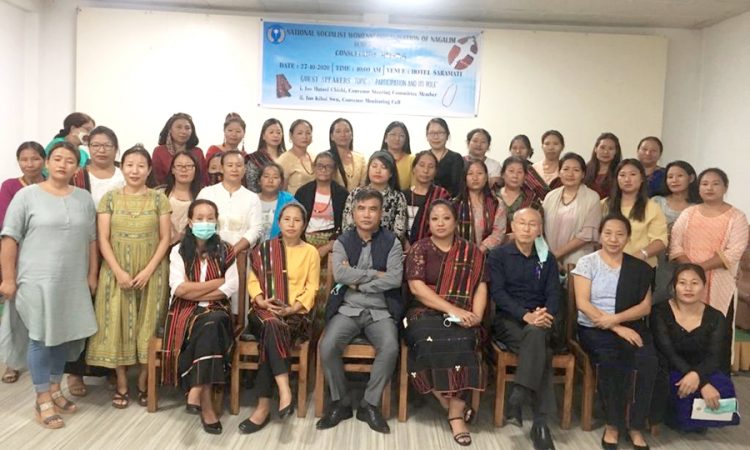 Dimapur, October 27: National Socialist Women Organization of Nagalim Sumi Region held a consultative meeting today attended by Hutovi Chishi Swu, Convener, Steering Committee NSCN, Kihoi Swu, Convener, Ceasefire Monitoring Cell, who were guest speaker.
The house thoroughly deliberated on the ongoing Indo-Naga political talks for a political solution and the current situation revolving the same.
The house endorsed 3rd August 2015 Framework Agreement signed between the Government of India and NSCN representing the Naga people whereby the sovereign rights of the Nagas were recognized.
The NSWON said the recognition of the unique history of the Nagas, the acknowledgement of the Universal Principles of Democracy that sovereignty lies with people, the share sovereignty and peaceful coexistence of the two entities, unequivocally states the components of the Naga Flag and constitution as an integral part of solution.
The Organization further stated that in course of several decades of Indo-Naga conflict more than 3.5 lakhs Nagas have laid down their lives for the secret cause of the Nagas, adding the alien aggression on Nagas’ land and people have resulted to hundred thousands of widows and orphans and Sumi community is not an exception.
NSWON chairperson, Sumi Region, Kahuli S Chishi termed it unfortunate that some groups of people who are preparing for sale out arrangement for financial package and under Indian Constitution in exchange of the historical and political rights of the Nagas.
It condemned such groups for their irresponsible act and reaffirmed to commit and stand firm for the Naga national rights to the end. (Page News Service)