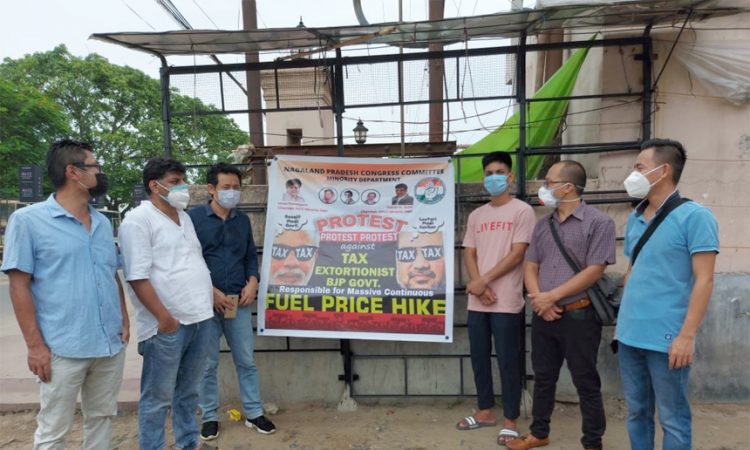 DIMAPUR, JUNE 11: The proposed “Protest against Fuel Price Hike” by National Students’ Union of India (NSUI), Nagaland Chapter, on Friday morning at NRL Petrol Pump, City Tower, Dimapur was called-off and later given the form of an online protest via social media platforms with the hashtag #BJPLootingIndia. A poster was also pasted outside the Congress Bhawan, Dimapur.

Talking to Nagaland Page, President of NSUI Nagaland X Chopika Sumi said that it was a part of the nationwide protest called by All India Congress Committee and once the information about the proposed protest went viral, the police reached out to the party and, apparently, the party didn’t have required permission.
He said that the cost of oil per barrel has significantly fallen in the global markets comparing to the time when UPA was in power and while at that time the price of petrol was still around Rs 70, it is now exceeding Rs 100 per litre, particularly because of the huge excise duty being imposed, which he termed as a loot and demanded that the cost of diesel and petrol be cut down as people are facing tremendous hardship and this rise is enhancing the cost of other necessities.
On Friday morning, a significant presence of police personnel was witnessed at the spot where the proposed protest was supposed to take place, but the protestors didn’t arrive.
State Chairman of NPCC’s Minority Department, Rajesh Kumar Sethi told Nagaland Page that the decision not to go ahead with the proposed protest was taken considering the lockdown and the pandemic.
Commenting on the hardship of people during the lockdown in the state, Sethi informed that committee had written to the Government to devise an arrangement where livelihood of everyone is being taken care of.
On reports that some people who don’t have ration cards are being denied rations, he stated that the committee had also written about this and he has lately witnessed that arrangements are being made to take care of the requirements of those who don’t have ration cards.

Talking to Nagaland Page, an auto driver of Dimapur grieved that he is facing much difficulty because of the lockdown and for not having a ration card. He said that last year when the nation-wide lockdown was announced, he was getting the ration even though he didn’t have a ration card but this time he is not getting any ration and he is out of money too.
Nagaland Page could not independently confirm with the village council of his area if the non-ration card holders are being denied ration, but apparently, in other places within Dimapur, after initially only providing rations to the ration card holders, non-ration card holders are also now being provided rations.
(Page News Service)