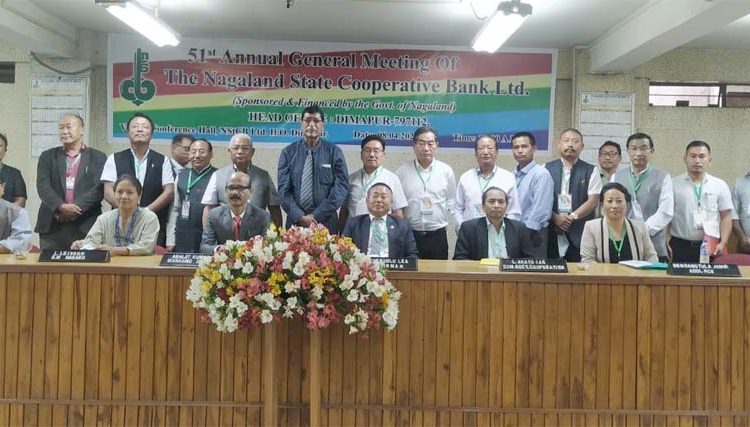 Dimapur, April 8: Chairman of Nagaland State Co-operative Bank, Sentiyanger Imchen, on Thursday revealed that in the midst of the pandemic, moderation in economic growth and intensive competitive financial landscape, the bank could make a steady growth in both business and earnings.

Speaking during the 51st Annual General Meeting held at NStCB conference hall in Dimapur, Imchen said that the balance sheet size of the bank registered a growth of 16.97% as of March 31, 2020 as against 12.53% of the previous year, and credited for this the variance in growth of deposits from CASA segment.
Another milestone that the bank recorded over the financial year is the complete recovery of the accumulated loss of Rs 1126.02 lakh of the previous year. The operating profit for the year also saw a jump from Rs 914.85 lakh to Rs 1126.02 lakh.
The Capital Adequacy to Risk Weighted Assets Ratio (CRAR) of the bank continued to scale this year too and improved from 19.59% to 21.28% and stands now far above the regulatory stipulation of 9%. During the same period, the total deposits of the bank increased from Rs 78446.80 lakh to Rs 93,815.46 lakh registering a growth of 19.59%.
The CASA deposits also increased from Rs 44,349.12 lakh to Rs 54,519.01 lakh.
The bank also registered a growth of 18.81% in terms of business per employee, from Rs 534.78 lakh to Rs 635.40 lakh; and business per branch grew from Rs 6137.27 lakh to Rs 7382.76 lakh.
The bank steadily progressed after overcoming the negative impact and made a turnaround in 2019-2020 by achieving a balance of profit of Rs.146.25 lakhs after writing off its inherited accumulated loss amounting to Rs 4521.41 Lakh during the last 23 years.
Imchen informed that the bank has also taken initiative under financial inclusion and opened 61261 job card accounts, 12593 PMJDY accounts, 987 PMJJBY accounts, 11781 SBKCC accounts and 22976 no frill accounts as of March 31, 2020, and issued RuPay Debit card to eligible customers. The bank also transferred Rs 25.67 lakh to 1711 PMJDY account holders under PMGKY.
According to him, the bank saw improvements in most of the parameters despite the lockdown.
In terms of deployment of resources, in the last financial year, the total loans and advances increased from Rs 50,435.90 lakh to Rs 61,22.41 lakh, registering a growth rate of 21.39% as against 18.60% of the previous year.
However, the bank saw a declined rate of recovery of loans and advances during the same time i.e., 58.36%, down from 59.92% the previous year; and the NPA increased to the extent of Rs 1817.15 lakh.
It may be mentioned that NStCB presently is the second largest bank in the State after SBI and the Government of Nagaland continues to be its largest stakeholder having 61.67% of the total paid-up capital. It also has the second largest number of ATMs (22) in the State after SBI.
L Akato Sema, Commissioner & Secretary (Cooperation), expressed hope that the bank will continue to grow in the years to come, while a representative of RCS Nagaland mentioned that the bank should reach out to the people associated with the agri sector to make the State self-sufficient.

General Manager (OIC) of NABARD, RO Nagaland, L Leivang cautioned the bank not to get comfortable and to keep improving before the market disrupts the bank. She also stressed on strengthening cyber security.
During the meeting, three Board of Directors were also elected representing Mon (Manling Konyak), Mokokchung (Imtiyanger) and Wokha (LN Ngully).
(Page News Service)