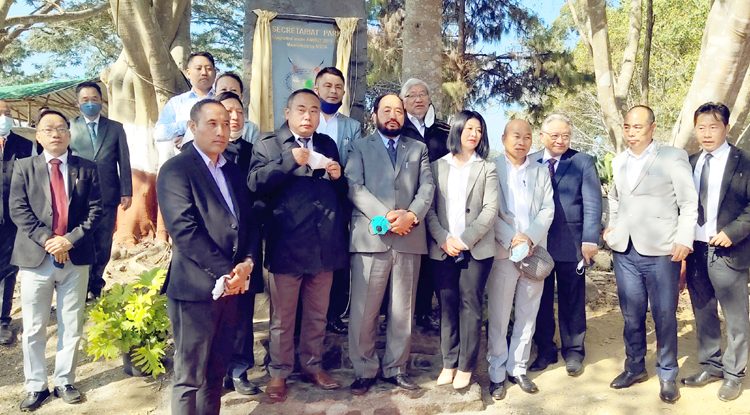 Deputy CM Y Patton with ministers and advisors &NSSA officials during the golden jubilee celebration of NSSA at Secretariat Park Kohima on December 10, 2020.

Affirms to be catalyst & motivation for all other Services

KOHIMA, DECEMBER 10: The Nagaland Secretariat Service Association (NSSA), as the core of governance in the State, today affirmed to be a catalyst and motivation for all other Services. This was part of the resolution of NSSA adopted during its Golden Jubilee celebration at Secretariat Park here today.

NSSA resolved that all its members would re-define their service in line with the Association’s theme “Committed to Serve” alongside the golden jubilee theme “Braced to Excel” for maintaining decorum, punctuality, discipline, integrity and devotion to duty.
They also resolved that all retired NSSA members would be invited to participate in a biennial Conference/Meeting organized by Association in order to maintain a sense of brotherhood/sisterhood within the NSSA fraternity which would bring about a sense of belonging and oneness amongst all past and present NSSA members.
Cadre review in respect of NSS may be undertaken as and when due without delay, it was resolved.
The Association also resolved to initiate relocation of the NSSA Guest House at Diphupar, Dimapur, to Kohima, as it would have better monitoring and also benefit NSSA as well as be far more convenient in all aspects.
Meanwhile, Nagaland Deputy Chief Minister, Y Patton addressing the gathering as Special Guest stated that Nagaland Secretariat Service Association (NSSA) being the first ever cadre service association in the State is considered as the premier association to be working relentlessly with successive policy makers.
He said over the years, the Association has always maintained high standards of professional ethics and values in governance thereby considered as the premier Association.
Being housed in the nerve centre and working relentlessly with successive policy makers, NSSA should continue the sacrifices and render their services to the citizens of the State, he said.
Reminding that jubilee is an occasion to remember the pioneers and leaders through whose sacrifices and visions that the Association has come thus far, he encouraged NSSA members to commit themselves and work with a renewed dedication for the smooth functioning and development of the State thereby delivering good governance to the people.
He expressed confidence that NSSA, a conglomerate of enthusiastic and responsible officers, would rise up to the occasion and work for the progress and growth of the entire Naga society.
Marking the occasion, the Deputy Chief Minister also unveiled the jubilee monolith while also releasing the NSSA blazer and souvenir. He also planted a tree sapling as an initiative of NSSA to plant 1000 trees marking the celebrations.
Advisor for Urban Development and Municipal Affairs, MLA Dr Neikiesalie Kire released NSAA Who’s Who Volume-I.
NSSA President, Chubasangla Longkumer said the Association is the first ever cadre service Association in the State of Nagaland, which originated in the 1960s and was adopted under the chairmanship of late R M Dharr, Deputy Secretary, Planning Department, in November, 1970, wherein late N L Murry was inducted as the first interim president along with 9 others as interim executive members.
She expressed gratitude to the members, both retired and in-service, who have made significant contributions over the years towards the growth of the Association so far.
She asserted that the Association stands firm to resolve in the conduct and discharge of public service for higher level of performance and henceforth with the pandemic the Association shouldered responsibility for everyone to stay safe through various acts and deeds in the Secretariat and will continue to keep the spirit of camaraderie in the work place.
She encouraged every member to re-align and re-commit oneself to excel in their work and render positive and constructive service to the Government and the people of the State.
On the occasion, Longkumer thanked the State Government for allowing the NSSA to adopt and maintain the Secretariat Park. This Park will be an ideal site for visitors and Secretariat employees to relax and work free from stress, she said.