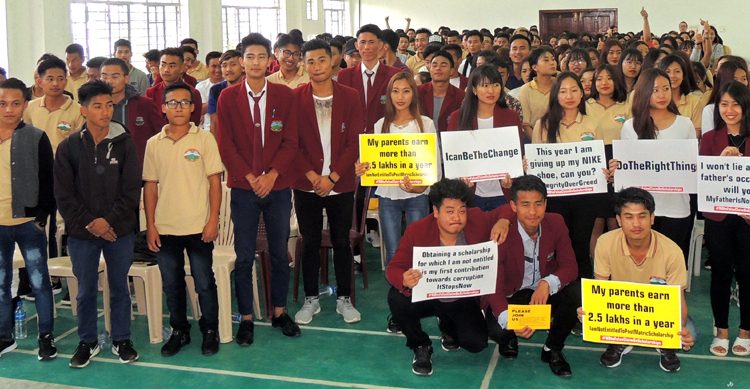 Kohima, July 16: Concerned over the increasing number of false scholarship claims, which has led to depriving the actual beneficiaries, the Naga Students’ Federation (NSF) today launched “No to false claim on scholarships” campaign by holding the campaign kick off programme at Sazolie College Jotsoma here today.
Addressing the students gathering, NSF president Kesosül Christopher Ltu said the federation initiated the campaign with the motive to create awareness and spread the message to discourage non-eligible students from applying for scholarship so that the genuine students would not be deprived of their rights.
Reminded the students’ that the actual purpose of scholarship is to reimburse the students’ academic expenses whose parents’ income is low, he expressed doubt that in Nagaland many bogus candidates apply scholarship, because statistics shows that every year around 45000 students apply for scholarship under various schemes in the state.
He said the federation is part of this campaign with an object to discourage corruption in the society and there is no imposition or compulsion but it should about voluntary discontinuation or be conscious not to apply.
He challenged the students’ community to come up voluntarily and set an example as a model and be the ambassadors against corruption and malpractice in the state.
“Many genuine students undertaking professional courses outside the state receive lesser scholarship amount as compared with other north eastern states,” he remarked while urging the state government to increase the scholarship amount for genuine students.
He also informed that as part of the first phase of the campaign, NSF would select some students as models to reach out to the different section of people in order to sensitize by holding create awareness programme.
Principal of Sazolie College Dr. Kangzang Thou said honesty and truthfulness should start from oneself while also maintaining that such initiative to encourage honesty and truthfulness should start from the students and institutions.
NSF general secretary Imtiyapang Imsong as the chair of the programme said Naga people have started losing the forefather’s legacy of honesty and truthfulness and we should uphold the good legacy by this generation.
During the kick-off programme, student volunteers also held placards some of which read – “My parents earn more than Rs 2.5 lakh in a year… I am not entitled for Post Matric Scholarship”, “I won’t lie about my father’s occupation, will you?”, “Obtaining a scholarship for which I am not entitled is my first contribution towards corruption… Let’s stop now”.
Others present during the programme include leaders of Angami Students’ Union and All Nagaland College Students’ Union. (Page News Service)