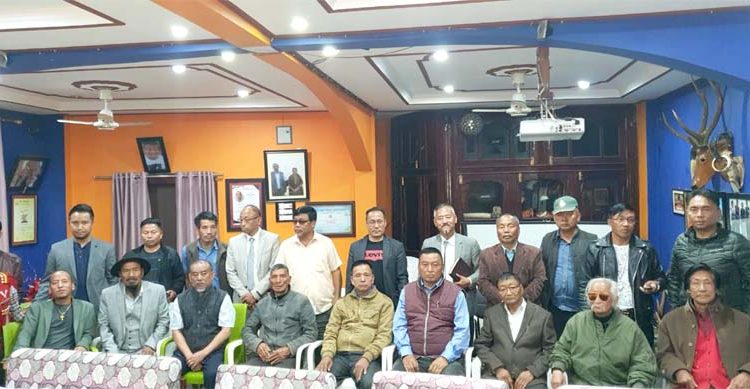 Dimapur, January 29: Taking cognizance of the appeal and prayer of the Naga people, the NSCN/GPRN led by Lt Gen (Retd) Khango has decided to join NNPGs Working Committee (WC) maintaining its identity and as partner in the ongoing political negotiations with the Government of India.
This decision was taken during a meeting of the NNPGs including NSCN/GPRN(K) under the leader of Lt Gen (Retd) Khango Konyak, President and Col (Retd) Isak Sumi, General Secretary today.
The house appreciated the wisdom and maturity exhibited by NSCN/GPRN(K) leadership.
‘Anti-defection pact’
According to a ‘Deed of Agreement’ signed by N Kitovi Zhimomi, Convenor, WC NNPGs; Zhopra Vero, Co-Convenor, WC, NNPGs; Y Wangtin Naga, Co-Convenor, WC NNPGs, Hozheto Chopy, Co-Convenor, WC, NNPGs, Kiumukam Yimchunger, Co-Convenor, WC, NNPGs, Toshi Walling, Co-Convenor, WC, NNPGs and Lt Gen (Retd), Khango Konyak, President, NSCN/GPRN(K), it was also resolved that all defectors, both civil and military workers within the NNPGs, to abide by the resolutions dated 13th May 2017, 8th August 2017, 19th September 2017, 6th October 2017. These resolutions were unanimously reaffirmed by the Naga leaders present.
The house also resolve to offer 10 days i.e. February 8, 2019 to all the defectors to return to their parent organization, failing which, the WC, NNPGs would jointly decided on the course of acton deemed necessary.
The house resolved that defection among the Naga political groups has even been a thorn in a flesh causing irreparable damages to the Naga cause and therefore it is mandatory for all signatories to enforce “Anti-Defection Agreement”.
Meanwhile, in a separate press statement issued by president, NSCN/GPRN(K), Lt Gen (retd) Khango Konyak and general secretary, Col (retd) Isak Sumi stated that the NSCN/GPRN(K) after thorough deliberations with the NNPGs has resolved to partner and participate in the ongoing Indo-Naga political dialogue alongside Working Committee (WC), NNPGs.
It said the NSCN/GPRN(K) also resolved not to entertain defectors in any manner whatsoever and shall uphold the NNPGs anti-defection agreement in letter and spirit so as to protect the sanctity of the Naga historical and political rights. (Page News Service)