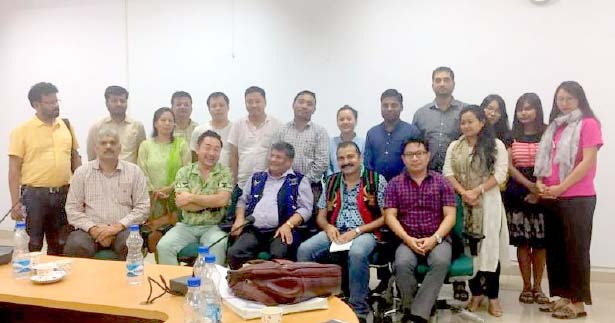 Dimapur, September 10: The Naga Scholars Association (NSA) had organized a special talk on ‘Higher Education in India: UGC and the question of autonomy’, on September 8 at School of International Studies (SIS), JNU, New Delhi.
Dr. Zuchamo Yanthan, President of NSA started with a welcome address and the introduction of the resource persons; Prof. Aditya Narayan Misra former President of DUTA & FEDCUTA and Dr.Rajesh Jha, Academic Council member of Delhi University.
He stated that the proposed topic is relevant considering UCG’s reforms in higher education for better understanding on the issue whether autonomy in higher education is merely driven for financial benefits or it will take universities into privatization rather than strengthening public funded institutions.
Prof.Aditya Narayan Misra highlighted the proposed bill of Higher Education Commission of India (HECI) Act 2018, which repeals the UGC Act, 1956.
He stated that the proposed bill is designed towards strangulating higher education in India by destroying the autonomy that is given to all Universities and Institutions. He gave one example of colonial times when Lord Curzon attempted to appropriate Higher Education through a similar legislation and it was also resisted. A resolution was passed resolution by the then Madras Session of Congress to claim autonomy for the University system as no University can be called a University without an organic system of autonomy and freedom from every governmental control.
Prof Misra also argued that while the UGC Act mandated the commission ‘to inquire into the financial needs of Universities’ and ‘allocate and disburse, out of the fund of the Commission’ to the universities (under section 12 of the UGC Act, 1956). However, after the HECI, now the MHRD has taken over the allocations to be made to the universities, which will convert universities into merely department of the government. This will certainly bring universities under the strict and direct financial control of the MHRD. The financial control by the Ministry will be used for promoting Government agenda in place of objective universal knowledge.
He further stated that this advent of regulatory body means privatization of higher education in India, which will make higher education inaccessible for poor, SC, ST and OBC students. Moreover, one of the proposed functions of HECI is to lay down the standard for autonomous colleges and graded autonomy for universities, which is nothing but blatant privatization and contractualisation of Universities.
The speaker also questioned the ongoing uniform syllabi that is implemented across universities in India which he said is going against diversification of education in the country. He even gave an example of how universities across the advanced countries do not have any uniformity in their syllabi. He strongly stated that diversification of education is important as it contributes to the process of generating varieties of knowledge and modes of its dissemination.
Prof. Misra also raised some pertinent concerns why private universities are not allowed to design their own syllabi, why budget allocation on education has come down so drastically, why teachers not allowed designing their own syllabi, why there is huge cut in research enrolment, why there are huge cut off funding in research laboratories and questioned on strengthening scope for privatization rather than strengthening public funded institutions.
He concluded his lecture by stating that there is lack of inclusion in the education system in India. Moreover, the higher education has lost its independence and fast becoming like any other Government department.
He also stated that the challenge now is scholars across India should work hard to re-establish its lost glory that is bringing back the autonomy in all the universities in the country. His other main concern is also privatization of education in the country and the total exploitations by the private universities.
He ended his lecture by asking whether India’s fight for freedom is worthy of such pathetic welfare state where universities are losing their autonomy.
The speaker Prof. Aditya Narayan Misra teaches in Delhi University and had served as President of Delhi University Teachers’ Association (DUTA) for three terms and two times president of Federation of Central Universities Teachers’ Association (FEDCUTA). The session was chaired by Dr.Rajesh Jha who teaches Political Science in Delhi University and member of Academic Council of Delhi University.
(Page News Service)

Vaccine can save precious lives: Yangseo