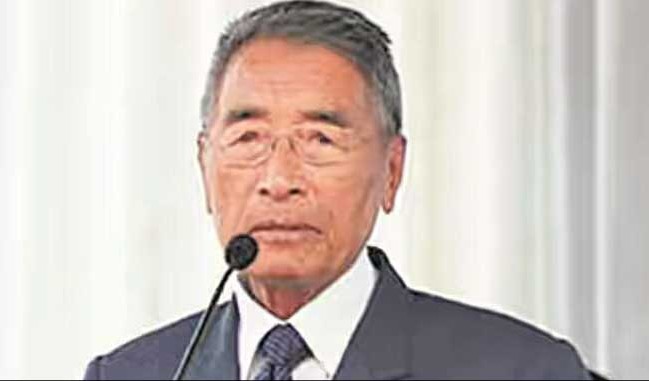 DIMAPUR, SEPTEMBER 3: President of Naga People’s Front (NPF), Dr. Shürhozelie Liezietsu today categorically stated that the NPF has made a passage for Naga people in achieving an emotional integration and maintained that, though the Naga people are yet to be politically integrated but with the existence of NPF all over the Naga areas has given the whole of Naga people to be emotionally integrated.

Speaking on the occasion of the inauguration programe of the NPF Manipur State Unit Head Office, at Senapati town, the President said that the new office, which is a milestone beginning for the party will remain a source of strength for not only the party but the Naga people, adding the NPF party office will stand as a sign of oneness.
Stressing on the concept of opposition-less Government in Nagaland, the NPF President said that the MLAs of the 13th Nagaland Legislative Assembly coming together is nothing but a sign of unity to press for an early resolution to the Naga political issue.
He maintained that Naga people should have one voice for the peaceful and honourable solution to the Naga problem and stated that though the political parties is only a facilitator to the Naga peace process yet coming together of the MLAs is a new exercise and experiment to have one voice for the larger interest of the Naga people.
According to a press release issued by NPF Press Bureau, NPF Manipur State Unit (MSU) President, Awangbow Newmai, who is also the Minister in the Manipur Government, in his speech asserted to work for an early solution to the Naga Political solution.
“Nagas have nothing to fear, as we are seeking only our rights”, he said adding that if Government of India rejected the Naga political issue then it’s like rejecting the Naga people.
Speaking on the Manipur State Assembly election, which is due early next year, the Minister said that the NPF is prepared for the Assembly elections as well as the ADC elections and expressed the hoped that the party will perform much better.
The MSU president also asserted to carry forward the aspiration and motto of the NPF party for the betterment of the Naga people.
Nagaland Legislative Assembly MLA, Vikheho Swu who is the MLA in-charge of the Manipur State, in his address, stated that the NPF party was launched in Manipur with a vision to bring the Nagas living in the hill areas to come under one umbrella so as to highlight and develop the socio-economic development, culture, environment and our identity.

“As we gear up for the General Election 2022, the MLA Manipur in-charge said that the vision to have a developed and progressive Nagas occupied hill areas in the State is not a far-fetched dream and called upon the people to work and awaken the people to the common vision for purposeful united and bonding Manipur for peace and development.
Secretary General of the party, Achumbemo Kikon, who also spoke on the occasion, maintained that the NPF party is not just a political party but a party with difference, to represent the sentiment and aspiration of the Naga people.
Further, he said the NPF represents the Naga people and the party stands for peaceful co-existence with every society.
Earlier, the moderator of the programme, Robert T Maram, working president NPF (MSU) delivered the welcome address.
(Page News Service)