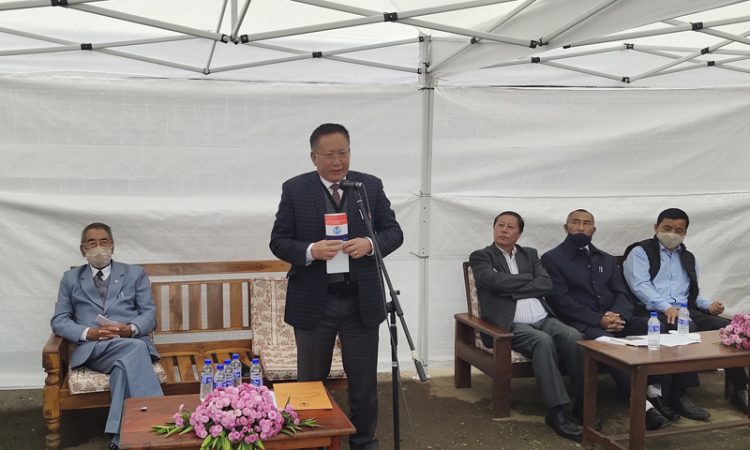 Kohima, October 26: Opposition Naga People’s Front (NPF) today charged the ruling PDA government of failing to sincerely implement the developmental projects initiated by the then DAN government and also misleading the public on Naga political issue.
Addressing a bye-election rally to 14-Southern Angami-I Assembly Constituency at Jakhama village here for NPF candidate Kikovi Kirha, Opposition Leader and former Chief Minister, T R Zeliang expressed surprise on the claims of Chief Minister Neiphiu Rio during the election campaign about the October 20 meeting in Delhi with Union Home Minister Amit Shah and others.
During the campaign, Rio had said that the Government of India is trying to work out ways to constitutionally allow Nagas to use separate flag while the issue of Yehzabo (constitution) would be taken up post solution for which a committee would be set up.
Zeliang charged Rio for not informing even the Opposition Leader, who was also present during the meeting. He said Shah had called both of them while Assam Chief Minister Sarbanda Sonowal was also present along with Director of Intelligence Bureau and Special Secretary Home.
He said that “Shah while asserting that GoI desires to have one solution had asked both the CM and Leader of Opposition to work together to unite the Naga groups for one solution”.
On the issue of separate flag and constitution, Zeliang said Union Home Minister has informed that the IB team is having discussions to resolve the matter for a final solution.
He informed that returning from Delhi, he is holding discussions with the party level while the final meeting would be held on October 30. Zeliang also informed that he and Rio are in touch while a date is yet to be fixed for a joint meeting of the two parties to work out further measures.
The former Chief Minister also charged the present PDA government of not being able to materialize the projects, specially four-lanning of the Kohima Bye-pass road from Jotsoma to Phesama saying that during NPF regime Central government had approved several road projects including the said bye-pass road, he said.
An amount of Rs 542.47 crore was sanctioned and tender was floated after the NDPP came to power but the same was not opened and cancelled in January 2019 with a simple statement from the state government that it is being done due to administrative reasons.
After that the PDA government brought in a new consultant and changed it into 2 lane while work order has also been issued for 4 phases.
Maintaining that such change in the project tantamount to cheating the people of the Southern Angami region, Zeliang said since there is no one in the opposition bench from the area the government is doing things at its own whims and fancies without even consulting the area people.
In this, he asked the people of the area to cast their vote in favour of the NPF candidate Kirha saying that he would represent the people of the area and raise voice against the wrong activities of the State government.
“The loss of a major project should be understood by the villagers, because the Rio government is fooling the people saying that once two lane is completed they would take up construction of four lane,” he quipped.
Naga people want development and the NPF government did bring several projects for the welfare and uplift of the State, but the present ruling NDPP is insincere towards implementing the already sanctioned projects, Zeliang said.
Jakhama village is the biggest village and also has the highest electorates in the constituency, but this election the electorates in order to correct the government they should vote against the ruling candidate, he said.
NPF president, Dr Shurhozelie Liezietsu said his party would not spend huge amounts to purchase votes from the electorates unlike the ruling Party but it is for the electorates to use their conscience in electing the right representative.
“We should elect leaders and not players who lure voters with money and other inducements,” said Dr Liezietsu.
Expressing that the Southern Angami region has been a strong hold of the regional party, he said NPF or the cock symbol party is the second oldest regional party in the country.
Chief Minister, Neiphiu Rio was also a regionalist but has gone away because of his own wrong calculations and misdeeds, Dr Liezietsu said.
Meanwhile, Dr Liezietsu lashed out at Rio for terming NPF and its leaders as a dead party. “We are still functioning and will continue to remain in politics till the prime object of the Party of a honourable and acceptable solution to the vexed Naga political issue is achieved,” he said.
In Nagaland many political parties come to fray during elections but fade away and even the NDPP will vanish as time passes, he said.
“The purpose of forming the NPF party was to take up the cause of Naga issue forward and even as we remain in ruling or opposition, we will continue to people’s party by upholding the tradition and culture of the Naga people,” he asserted.
NPF candidate Kikovi Kirha while appealing the electorates to cast their vote in his favour assured that given the opportunity he would give his best for people welfare and be their voice in the State Assembly.
MLAs Chotisuh Sazo, Yitachu, Y Vikheho Swu and former MLA Kropol Vitsu also spoke on the occasion. (Page News Service)