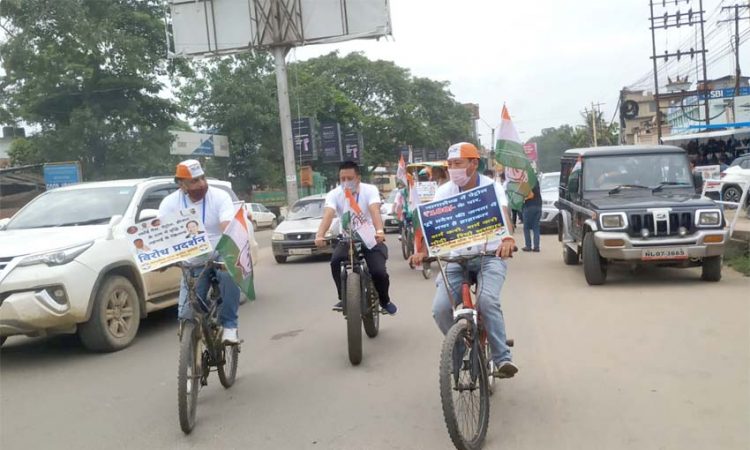 DIMAPUR, JULY 12: Nagaland Congress leaders and members ‘pedalled’ their ongoing agitation in the heart of Dimapur town via a ‘Cycle Yatra’ on Monday, as the party transferred their protest from online to offline once again.
Since July 7, Nagaland Pradesh Congress Committee (NPCC) has been involved in a 10-day protest ~ both online and offline ~ against rise in price of essential commodities and fuel.

A press release by the NPCC on Monday informed that Day 6 of its agitation involved a ‘Cycle Yatra’ in the heart of Dimapur town, from 9:30 a.m. to 10:30 a.m.
“PCC office bearers, Dimapur DCC, NSUI Nagaland, AIPC Nagaland and NPCC Minority Department took part in this Cycle Yatra. Keeping in view the COVID-19 lockdown guidelines, 12 cyclists took part in the yatra and were led by PCC President K Therie, seated in a cycle rickshaw, followed by other volunteers on foot in a symbolic show of protest”, it informed.
The protestors’ route was from Dimapur DCC office near Hotel Acacia to Clock Tower area via Nyamo Lotha Road-Circular Road; and returned via Circular Road-Dhobinala Junction-GS Road-MP-Road-Flyover-DCC office.
At Kohima, the District Congress Committee (DCC) and its frontal organisations, together with PCC office bearers, continued its mass signature campaign at all retail fuel stations across the capital town, it informed.
Similarly, signature campaigns were conducted at Mokokchung and Tuensang by the respective DCCs “and we had generated immense response from the public”, according to the NPCC.
The signature campaigns will continue till July 15.
“We also place on record, our sincere appreciation and gratitude to Nagaland Voluntary Consumers’ Organization (NVCO) for extending support to our ongoing agitation against rise in prices of essential commodities and fuel. We further urge all other CSOs and NGOs to come together and voice our protest against the prevailing conditions of unprecedented price hike that is making the life of common people miserable on all counts”, it added.

On July 7, while launching the agitation at Dimapur, NPCC chief K Therie had told Nagaland Page that the party is demanding rollback of Excise duty and VAT to the level they were in 2014, and elimination of COVID cess.
It may be mentioned that Excise duty on petrol was around Rs 9 per litre and diesel was around Rs 3 per litre in 2014. The Excise duty on both has now been increased to more than Rs 30 per litre.
The protest will culminate on July 16 with the party submitting a memorandum to the Governor of Nagaland to constitute an “Independent Pricing Commission”, headed by a High Court Judge, to streamline the essential commodities’ rates.
The memorandum will also carry the demand of the formation of a High Powered Committee to ‘streamline extortions’ and apply Society Registration Act (SRA) 1860.
NPCC President K Therie, who also participated in the rally riding on a rickshaw, told media persons that the party is demanding the rollback of Excise duty and VAT to the level of 2014 as well as elimination of COVID cess.
Started from the party office, during the rally the party workers covered Church Road, City Tower, Dhobinala and GS Road. (Page News Service)