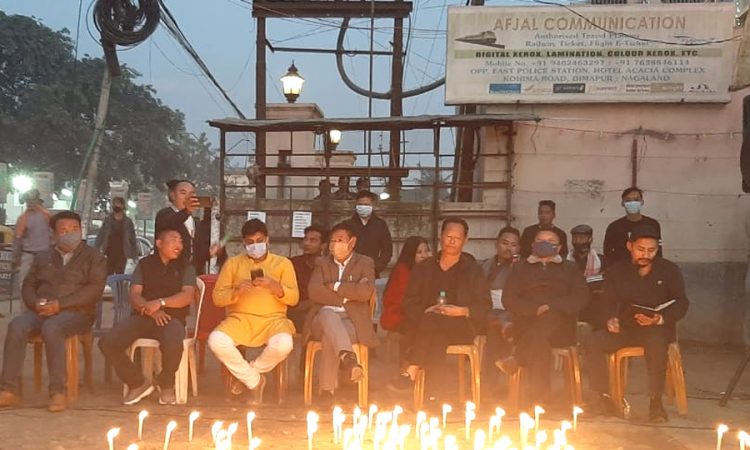 A candlelight protest by Congress party in Dimapur on Dec 8, 2020.

DIMAPUR, DCEMBER 8: Nagaland Pradesh Congress Committee Vice President, Jonathan Ao on Tuesday said that the ruling Government in Nagaland, being close to BJP, is not speaking on the issue of the farm bills and the protest going on and compared the ongoing protest to the French Revolution.

Speaking on the occasion of a candlelight protest, organized outside the Congress Bhawan, Dimapur, in solidarity with the protesting farmers, Jonathan said that a revolution has started, starting with the farmers and went on to compare the future of India in terms of the bills with that of pre-independent India saying that the corporates are going to do the same thing, which the British did to India by forcefully buying raw materials from the farmers at cheap rates and selling finished products at high rates.
Nagaland Pradesh Kisan Congress Chairman, V Lasuh alleged that the Central Government now belongs to Ambani and Ambani-Adani duo is soon going to control the country.
Stating that the farmers in Nagaland are still in dark and know no protest, he added that compared to what the state and country faced during the lockdown, tougher days are coming in the future.
“MSP is no more,” he said adding that everything now is being given to Ambani and the undemocratic Modi Government does everything without legislation whether it is the demonetization, the CAA or the farm bills.
The programme was organized by Nagaland Pradesh Kisan Congress.
(Page News Service)