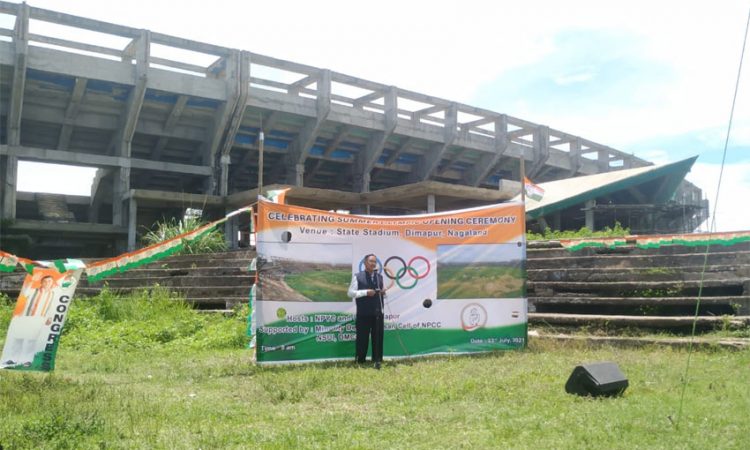 Brings attention to the 15-year under-construction State Stadium at Dimapur
DIMAPUR, JULY 23: Standing against the backdrop of the bleak under-construction State Stadium at Dimapur that was supposed to finish within 3 years after the construction begun in 2006, Nagaland Pradesh Congress Committee (NPCC) President K Therie on Friday echoed the recent statement of Delhi High Court where the Court ruled that a promise or assurance given by a Chief Minister “clearly amounts to an enforceable promise”.

Therie, speaking during a programme called “Celebrating Summer Olympic Opening Ceremony”, hosted by Nagaland Pradesh Youth Congress and Dimapur District Congress Committee, coinciding with the opening ceremony of Tokyo Olympics and drawing attention to the state of the stadium, said that CM Rio had promised to deliver the stadium long ago and inaugurate, but it could not become a reality and if the Delhi HC can corner the Kejriwal Government on a statement made by Arvind Kejriwal during the lockdown last year that the State would be paying the rent if any tenant is unable to pay the same, Rio’s promise also cannot be withdrawn.
Therie claimed that if given opportunity, he can assure that “Congress can fix it” and Congressmen and Congresswomen stand for truth. He added that Congress stands for the constitution, faith, regional identity and freedom of expression and the party believes not in multiple governments but solution.

Supported by Minority Department, Kissan Cell, National Students’ Union of India, Nagaland, District Mahila Congress Committee, and District Youth Congress, the event could be seen as an attempt to pin the blame on Rio and the successive Governments for the sorry state of sports infrastructure and policies in the State resulting in athletes from Nagaland not reaching their potential and getting exposure.
(Page News Service)