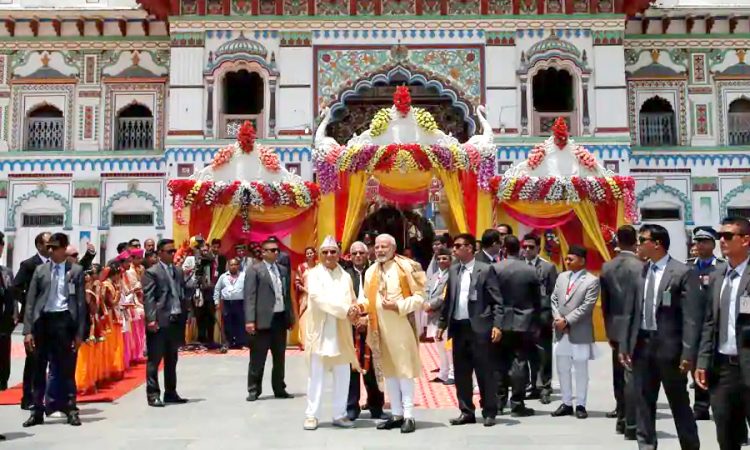 India is looking to revive the religious and cultural heritage of Nepal given the civilizational ties between the two countries. PM Modi had visited the Janaki Mandir in Janakpur, during his 2018 visit. (REUTERS)

NEW DELHI, JANUARY 6: Foreign Minister Pradeep Gyawali will land in New Delhi on 14 January to attend the 6th Nepal-India Joint Commission meeting with External Affairs Minister S Jaishankar that will begin the next day, people familiar with the matter said.
Officials in Kathmandu and New Delhi are giving final touches to agreements including one on the health sector that can be firmed up during the trip that is high on symbolism because of its timing.
Gyawali’s visit is taking place against the backdrop of a flux in Nepal’s politics exacerbated by Prime Minister KP Sharma Oli when he dissolved Parliament last month. Fresh national elections have been scheduled on April 30 and May 10.
PM Oli later told people in a televised address that his rivals within the ruling Nepal Communist Party (NCP) had paralysed decision-making, leaving him with no other option.
It was a reference to the continuing power tussle with Pushpa Kamal Dahal aka Prachanda, the former Prime Minister who was also the co-chair of the party and had played a lead role along with another Prime Minister, Madhav Nepal, to force PM Oli’s exit.
India’s decision to go ahead with Gyawali’s visit – it was initially scheduled to take place last month – is seen to demonstrate India’s explicit support for the Nepali people and the ruling Oli Government, a Nepal watcher said about the visit that is seen to be high on the political quotient.
During his visit, Gyawali is expected to get a clear commitment from New Delhi for supply of over 12 million doses of the Coronavirus vaccines produced in India. Nepal has offers from China to supply its version of the Sinovac vaccine. During discussions with Indian officials, Nepalese officials have, however, said that the Oli Government preferred to get its vaccine supplies from New Delhi.
Nepal’s Ambassador to India Nilamber Acharya has already held several rounds of meetings with Indian vaccine manufacturers and Government officials. His last meeting was on Tuesday with Dr V Krishna Mohan, Executive Director of Bharat Biotech that is producing the indigenously-developed COVID-19 vaccine.
China, which has poured millions of dollars into Nepal in recent years in the form of aid and infrastructure investment, appears to have exhausted its influence with PM Oli in recent months after it tried to pressure him to avoid splitting the ruling communist party at all costs. Beijing is lately seen to be leaning in support of the rival communist party faction led by Prachanda and Madhav Nepal.

India, in contrast, has already underlined that it has adopted a hands-off approach to the political developments in Nepal, calling PM Oli’s decision to dissolve the 275-member House of Representatives an internal matter.
Pradeep Gyawali’s discussions with Jaishankar are expected to take up the boundary dispute that had soured relations between the two neighbours when Kathmandu issued a new political map.
This visit will reboot ties, an Indian official said, stressing that the two countries shared a unique relationship of centuries-old civilizational ties based on shared geography, history, culture, language and religion.
India is also looking to revive the religious and cultural heritage of Nepal given the civilizational ties between the two countries and could propose help to promote infrastructure development around sites that hold a potential from this perspective.
It was a point that was underscored by Prime Minister Narendra Modi when he last visited Nepal in 2018, starting the visit from Janakpur and launching the Ramayana Circuit by flagging off a bus route between Janakpur and Ayodhya. PM Modi had then announced a Rs 100-crore package to develop the holy city of Janakpur. (Courtesy: HT)