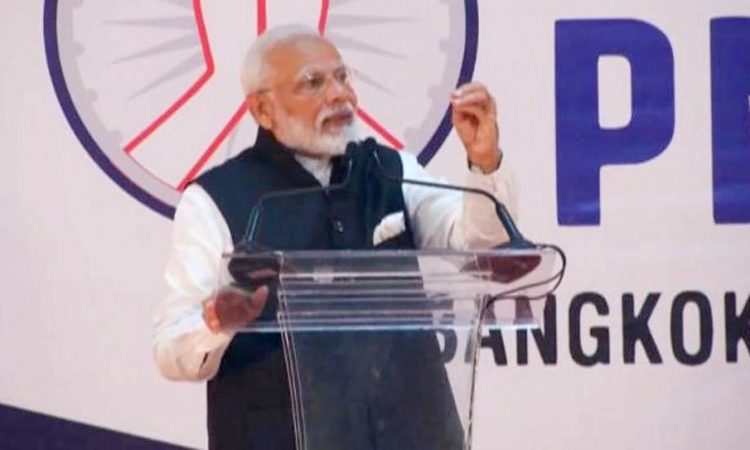 New Delhi, November 2: Prime Minister Narendra Modi said on Saturday India wants to strengthen its “deep friendly and historical relationship” with Thailand by transforming its northeastern region as a gateway to Southeast Asia.
Modi hailed India’s ties with Thailand and talked about the similarities between the two cultures as he addressed thousands of people of Indian origin in Bangkok’s Nimibutr Stadium at the ‘Sawasdee PM Modi’ event.
The Prime Minister said one of the key elements of his government is to strengthen the ties with ASEAN countries.
“For that, we’ve formed the Act East Policy… For the first time last year, leaders from all 10 ASEAN countries came to India to participate in India’s Republic Day Celebrations,” Modi pointed out.
He said India wants to further strengthen the ties between India and Thailand by transforming its northeastern region as a gateway to Southeast Asia.
“This part of India will give strength to both our Act East Policy and Thailand’s Act West Policy,” he said.
“Once the India-Myanmar-Thailand trilateral highway is opened, then there will be seamless connectivity between northeast India and Thailand. This will increase trade in this region as well as tourism and tradition,” he said.
Modi also talked about how India and Thailand have come together to build a relationship, including he said the flights between the two countries, especially his parliamentary constituency Varanasi.
“India and Thailand are progressing at a rapid pace, together. At least 300 flights fly between the two countries weekly. At least 18 destinations in Thailand are connected to India, and the average flight time is between two to four hours,” he said.
“A direct flight has been started from Varanasi, my constituency and the world’s oldest cultural hub, to Thailand. It has also garnered a lot of fame,” he added.
The Prime Minister also emphasised the similarities between Thailand and India.
“You are of Indian origin also because you can find familiarity in every particle of Thailand. There is a glimpse of Indianness in the way people talk, its food, in its traditions, faith and architecture,” he said amid chants of Modi, Modi.
‘Sawasdee PM Modi’ is being organised by Thai Indians along with the Indian embassy in Bangkok. “Sawasdee”, derived from Sanskrit svasti or well being, is the word Thai people use for greetings and goodbye.
“The ties between India and Thailand is not just between the two governments. Every moment and event in history has developed and broadened our relationship and taken it to new heights. These relationships are of the heart, soul, faith and spirituality,” he said.
“Thousands of years ago, ties with South East Asia developed through sea routes and our sailors then travelled thousands of miles on the waves of the sea to build bridges of prosperity and culture that still exist,” he said.
The Prime Minister talked about the massive mandate his Bharatiya Janata Party (BJP) received “for the first time in 60 years” in the Lok Sabha elections held in April-May to form the government for a second term.
“The transformation that India is undergoing at the moment is exactly why the people of the country chose me to become their prime servant for the second time in the Lok Sabha polls earlier this year. They blessed me with more votes than they did last time,” he said.
He had to stop his speech several times as people at the Nimibutr Stadium cheered him on while he spoke about his government’s scheme and policies, including Ayushman Bharat, which he said have benefitted millions of people in India.
“When a decision is right and is taken with the right mentality, it resonates with the entire world. Today, I can hear it in Thailand. This standing ovation from you is for the Parliament of India,” Modi said.
Before his address in Hindi, the Prime Minister also released a commemorative coin marking the 550th birth anniversary of Guru Nanak Dev and the Thai translation of Tamil classic ‘Tirukkural’ written by Thiruvalluvar.
Saturday’s event comes after the mega ‘Howdy, Modi!’ outreach programme in the US’ Houston on September 23 attended by more than 50,000 people. US president Donald Trump was also present at the event.
Modi is in Thailand on a three-day visit to take part in the Association of Southeast Asian Nations (ASEAN), East Asia, and Regional Comprehensive Economic Partnership (RCEP) summits.
Prime Minister Modi will co-chair the 16th ASEAN-India summit alongside Thai Prime Minister Prayut Chan-o-cha on Sunday.
In a statement before his departure, the Prime Minister said that during the visit, he will also hold bilateral meetings with a number of other world leaders present in the Thailand capital for related summit meetings.
“The ASEAN-related summits are an integral part of our diplomatic calendar, and an important element in our Act East Policy. Our partnership with ASEAN is built around the key pillars of connectivity, capacity-building, commerce and culture,” he had said. (Courtesy:HT)