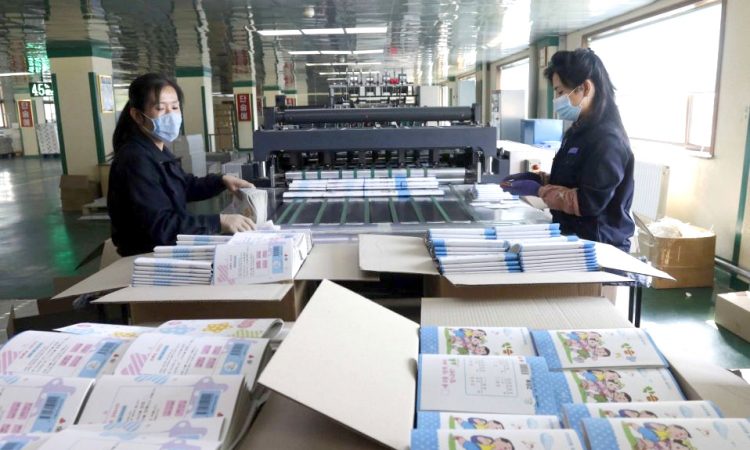 Employees at the Mindulle Notebook Factory assemble notebooks in a larger quantity to pupils and students across the country in Pyongyang, North Korea, Thursday, Nov. 12, 2020. North Korea is staging an “80-day battle,” a propaganda-heavy productivity campaign meant to bolster its internal unity and report greater production in various industry sectors ahead of a ruling party congress in January. (AP Photo)

Seoul, November 13: Before fleeing authoritarian North Korea in 2009, Kang Mi-Jin was regularly mobilised by the state for military-like productivity campaigns that were a source of both pride and pain. She was happy to be chosen to give a speech pledging loyalty to the ruling Kim family; less so when a tunneling construction project left her with a head injury.
Now living in rival South Korea, she has watched with deep interest the news of North Korea’s 80-day productivity campaign that began last month.
When they pushed us to work so hard, I wonder if they should have also paid us something, Kang, 52, said in an interview with The Associated Press. North Korean people have gotten used to providing such (free labour) for so long. They know they have nothing to gain by raising an issue with that.
North Korea occasionally stages such all-out national campaigns, which the state media call battles. They are meant to more firmly unite citizens around the Kim dynasty, press them to work harder and report bigger production numbers ahead of major political events.
The current campaign is aimed at greeting a ruling party congress set for January, the first of its kind in four years, with fiery enthusiasm and brilliant achievements, according to North Korea’s main Rodong Sinmun newspaper.
There’s widespread outside doubt that short-term campaigns of this sort can address the fundamental economic problems facing the impoverished country. But North Korean leaders are seen as needing these campaigns to cement their grip on power in times of economic trouble or tensions with the outside world.
North Korean leader Kim Jong Un faces his share of trouble: crippling US-led economic sanctions, the coronavirus pandemic and damage from devastating typhoons and summer floods.
In August, in a highly unusual admission of policy failure, North Korea’s ruling Workers Party said the economy had not improved in the face of the sustaining severe internal and external situations and that development goals have been seriously delayed. Kim said January’s congress would determine new objectives for the next five years.
North Korean authorities want their people to strain their nerves by maintaining a state of tension, said analyst Yang Un-chul at the private Sejong Institute near Seoul. North Korea is staging (this campaign) as it doesn’t have any other available option. But I wonder what changes this campaign could bring about.
Under the current 80-day battle, North Koreans are required to work extra hours to fulfill or exceed newly set quotas in all areas, including farming, coal mining, typhoon rehabilitation efforts and anti-coronavirus campaigns.
The official Korean Central News Agency recently reported about factories that had increased production during the first 10 days of the campaign. It said a fertilizer complex in the northeastern port city of Hungnam expanded its output by over 150% and a children’s knitwear factory in Pyongyang by 170%. The claims couldn’t be independently confirmed.
In an interview with the AP in North Korea, Jo Nam Hyok, an official at the Wonsan Leather Shoes Factory, said all factory employees are making vigorous struggles to overfulfil the production plan. Jang Hyon Jong of the Songdowon General Foodstuff Factory told AP that she would contribute to improving public livelihood by producing delicious bread .
North Korea performs many other smaller-scale productivity and speed campaigns. Many of them are also called battles.
For example, there are rice planting battles, fertiliser battles, weed-scraping battles and kimchi-making battles. I can’t count how many times I was mobilised for ‘battles.’ We did ‘battles’ every day, said Heo Young Chul, a 57-year-old North Korean defector who came to South Korea in 2002. I think I was mobilised hundreds of times, not dozens of times.
Kang, another defector, said she was sent to a mountain in southern North Korea to excavate a tunnel for highway construction during two consecutive 200-day battles in the late 1980s.
Because she was considered to have a fine voice, Kang was picked to deliver a speech before about 3,000 co-workers in January 1989 to pledge allegiance to North Korean founder Kim Il Sung, the late grandfather of Kim Jong Un, and vow to meet the set quotas.
Kang, now a reporter for the Daily NK, an online media outlet specialising in North Korea news, said she sometimes worked 12 hours a day and used a rock drill that was as heavy as she was. She said one of her co-workers lost his left hand during an accidental explosion.
Kang said most North Koreans at the time were willing to accept extra work during the battles because the state rationing system functioned well then. After a famine in the mid-1990s killed an estimated hundreds of thousands, however, many people failed to show up at the battles, she said.
During a 100-day battle in 2005 when Kang worked as head of a lower-level association of ordinary women in the northern town of Paekam, she said some women bribed her with shoes, clothes and meat to get out of work like building an outdoor swimming pool and a stone embankment.
The current 80-day battle is believed to be the 13th of its kind since North Korea’s foundation in 1948, and the third since Kim Jong Un took power in late 2011. There were two other battles in 2009, and Kim likely orchestrated them as heir apparent to his ailing father, Kim Jong Il, who suffered a stroke a year earlier, some experts say. (AP)