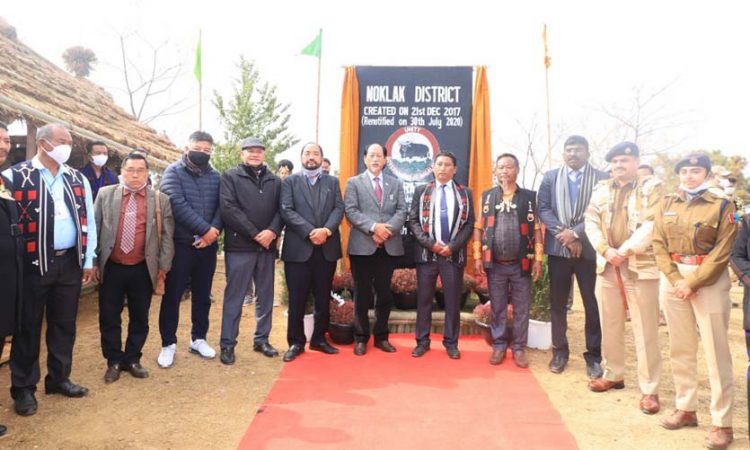 Addressing the inaugural ceremony of Noklak District cum khaozaosie- Hok-Ah festival as special guest, the Chief Minister named Noklak District the ‘Frontier District’ of Nagaland, as the district is located in the international boundary with Myanmar, which connects to other east and south east countries. He called upon the people to safe guard and to protect the region.
Rio also encouraged the citizens of the new district to have a competitive spirit and to cooperate with the Government for all round development. He urged the people of Noklak district to become self sufficient, while also encouraging the young people to start modern farming.
He also greeted the Khiamniungan community a gappy Khaozaosie-Hok-Ah festival – the festival of thanksgiving – and hoped that it will usher in a prosperous year.
Deputy Chief Minister, Y Patton advised the people of Noklak District to be peace loving and unite with neighboring districts. Though Noklak district is located in the far end of Nagaland , it is the gateway to the east, he said.
If people are united, Noklak will be more advanced district in Nagaland, he stated while advising the people to avoid land issues when development comes.
Advisor, Fisheries & Aquatic Resources, Eco & Statistics and Evaluation, L Khumo lauded the leadership of the Chief Minister, his deputy CM and the PDA Government for inaugurating Noklak District.
Advisor, Prisons, Printing & Stationery, H Haiying said for the people of Noklak, 20th January will be a historic day. The people of Noklak have been longing and cherishing for the district and today it has been fulfilled, he stated.
Chief Secretary, J Alam, IAS; Deputy Commissioner Tuensang, Kumar Ramnikant, IAS, president, Khiamniungan Tribal Council M.Thangou also spoke in the programme. Executive secretary, Khiamniungan Baptist Churches Association, P Hempao Lam dedicated the monolith.
Meanwhile, Vice President of India has also released a video on Noklak District profile and extended his best wishes to the new district. (Page News Service)