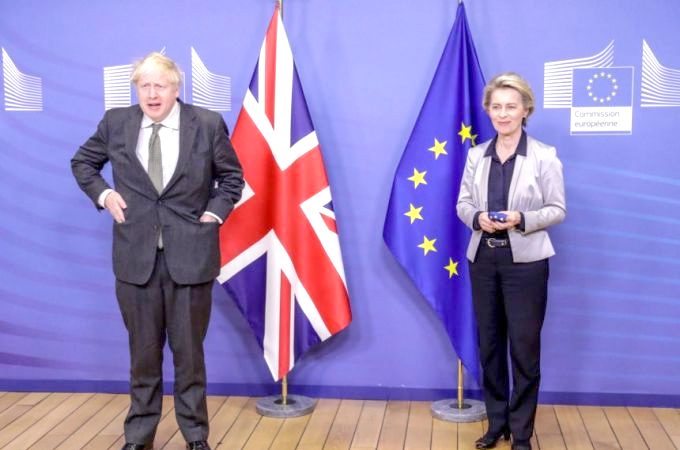 BRUSSELS/LONDON, December 11: Britain is now more likely to leave the European Union’s orbit on December 31 without a trade deal than with an agreement, European Commission President Ursula von der Leyen told the bloc’s 27 national leaders on Friday, an EU official said.
The United Kingdom quit the EU in January but remains an informal member until Dec. 31 when it will finally leave the bloc’s orbit after 48 years. Both sides say they want a trade deal but negotiations are deadlocked.
After British Prime Minister Boris Johnson said on Thursday there was “a strong possibility” a deal would not be clinched, von der Leyen said the probability of a no-deal had risen.
“The probability of a no deal is higher than of a deal,” said the official, who spoke on condition of anonymity about the message von der Leyen gave leaders at an EU summit in Brussels.
Johnson and von der Leyen have given negotiators until Sunday evening to break the impasse over fishing rights and allowing Britain to be punished if in the future it diverged from the bloc’s rules.
“Situation is difficult. Main obstacles remain,” the EU official said of von der Leyen’s message. “To be seen by Sunday whether a deal is possible.”
Sterling tumbled, stocks fell and implied volatility surged as investors started to price in the risk of a chaotic finale to the five-year Brexit crisis. The pound fell 0.8% against the dollar to $1.3190 before recovering somewhat.
A no-trade deal Brexit would damage the economies of northern Europe, send shockwaves through financial markets, snarl borders and sow chaos through the delicate supply chains which stretch across Europe and beyond.
Most major investment banks still say a deal is their central prediction, but some investors recall that Wall Street and the City of London were poorly prepared for the 2016 referendum as few believed Britain would vote to leave.
THEATRICS?
While some EU diplomats have cast Johnson’s rhetoric as theatricsintended to wrench out a deal and please his domestic Brexit supporters, British officials say London cannot accept the EU’s demands and caution that a nodeal is on the cards.
British Culture Secretary Oliver Dowden said there was still a chance of an agreement but added that no British leader could accept the EU’s demands.
“Still, I think, there is a significant possibility that we could get that deal,” Dowden, who voted to remain in the EU in the 2016 Brexit referendum, told Sky News. “That deal cannot come at any price.”
British and EU negotiators seeking a new arrangement on nearly $1 trillion in annual trade have been stuck on two main issues for weeks: how much fish EU boats can take from British waters and how far the EU can tie Britain into its rules in the future.
Trucks heading towards the English port of Dover were stacked up for miles on Thursday.
Bank of England Governor Andrew Bailey said there was a limit to the central bank’s ability to avoid all disruption or volatility in financial markets after Britain’s Brexit transition period – during which it has remained in the EU single market and customs union – ends on Dec. 31.
“I don’t want us to be in a situation, were it to occur, where people say ‘well you haven’t done this and you haven’t done that’ but I have to say there is a limit to what we can do,” Bailey told a news conference. (Reuters)