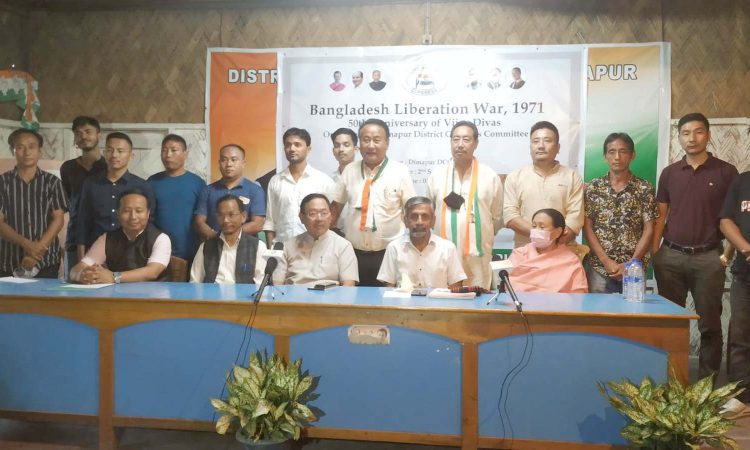 DIMAPUR, SEPTEMBER 2: President of Nagaland Pradesh Congress Committee (NPCC), K Therie on Thursday attacked the Nagaland United Government and said that all 60 MLAs of the Nagaland Legislative Assemble have nothing to do with the Naga political issue and all they comment is to be “facilitators and supporters” instead of “achieving and resolving.”

Speaking during the first of a series of district-level observations of the 50th Anniversary of Vijay Diwas, commemorating the Bangladesh Liberation War of 1971, here at Dimapur DCC Office, Therie said that the MLAs keep using the term “early solution” without suggesting anything concrete.
He said that there is a need to change, for which he asked the party workers to educate the people as everyone is responsible to bring the change.
The NPCC President stated that there is no political will to solve the issue. He went on to claim that as long as “these people” stay in power, the solution isn’t going to come as neither BJP nor the Nagaland Government is interested in bringing solution.
Therie proclaimed that in the 2023 NLA election, Congress is going to come back in power in Nagaland and NPCC is going to send one MP to the Lok Sabha, according to his “assessment”.
He also added that INC is set to emerge as the largest party among the parties fighting against BJP, dominated by regional parties, and form the next government at the Centre.
According to him, people have either the choice to see what Congress built over the years being sold by the BJP and be slaves to a few businessmen or restore the glory of India.
Captain Praveen Davar, Convenor of AICC Bangaladesh Liberation War Commemoration Committee (BLWCC), who had flown to Dimapur to attend the programme, gave a brief history of the series of events that ultimately led to the war and mentioned that the country should be grateful to the then Prime Minister of India Indira Gandhi for her tremendous service and brilliant leadership.
He said that India under the leadership of Indira Gandhi sliced a country into two in the 1971 war, changing the history and geography of Asia, “and it is the greatest achievement of the nation in its history”.
Yet the Congress didn’t use the military to gain politically, unlike the present regime which do such a show of even a surgical strike whose authenticity is not known and ask for votes in the name of the security forces, he said.

Earlier, NPCC General Secretary and State Coordinator of BLWCC Captain, GK Zhimomi had mentioned that Congress has been unable to highlight its achievements as it has always prioritised nation-building instead of marketing the party, but it’s time to amplify the achievements and take pride in them.
He revealed that in the days to come similar district-level programmes will also be conducted in other districts of the State and in October, the state-level programme will be followed by a national-level celebration.
(Page News Service)