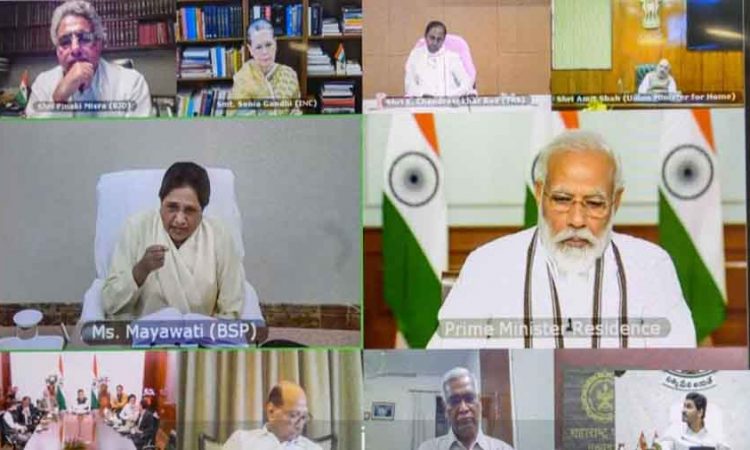 New Delhi, June 19: No one entered Indian territory nor were Indian posts taken over, Prime Minister Narendra Modi said on Friday on the six-week border standoff with China as he briefed prominent political leaders about the killing of 20 soldiers in the Galwan Valley that triggered a massive escalaton in tension between the two countries.
At an all-party meeting, he said the soldiers who made the supreme sacrifice taught a “lesson” to those who had dared to look towards India and that the army has been given “freedom” to take necessary steps.
“At the outset, prime minister clarified that neither is anyone inside our territory nor is any of our post captured,” the government said in a statement, adding he assured the leaders that the armed forces are leaving no stone unturned to protect the country.
The categorical statement by the prime minister came in the wake of reports that Chinese military has transgressed into the Indian side of the Line of Actual Control (LAC), the de-facto border, in several areas of eastern Ladakh including Pangong Tso and Galwan Valley.
“While on the one hand, the army has been given freedom to take necessary steps, India has also conveyed its position clearly to China through diplomatic means,” he said, adding that India today has such capability that no one can even dare to look towards “an inch of our land”.
Modi said the entire country is hurt and angry at the steps taken by China at the LAC and underscored that India wants peace and friendship, but upholding sovereignty is “foremost”.
The nearly four-hour meeting through video conference was attended by top opposition leaders including Sonia Gandhi, Sharad Pawar, Mamata Banerjee and Sitaram Yechury among others.
The government said the leaders of the political parties hailed the bravery displayed by the armed forces in Ladakh and reposed faith in the leadership of the prime minister in this hour of need. They expressed commitment to stand united with the government.
In the meeting Gandhi asked some tough questions to the government like whether there was any intelligence failure on the situation along the LAC, and sought an assurance from Modi that status quo ante would be restored at the border.
In her introductory remarks, she said even at this stage they were in the dark about many crucial aspects of the crisis as she posed a set of questions to the government and sought specifics about when Chinese troops intruded into the Indian territory.
“In the government’s considered view, was there a failure of intelligence,” she asked.
Defence Minister Rajnath Singh said that the nation will never forget the sacrifice of the martyrs while External Affairs Minister S Jaishankar gave an overview of agreements between India and China on border management, besides sharing details of recent developments.
The clash in Galwan Valley was the worst cross border confrontation between the two sides in 45 years. While India lost 20 soldiers, China’s People’s Liberation Army has not yet talked about the number of casualties it suffered.
The prime minister’s comment that Indian soldiers taught a “lesson” to those who dared to look towards India is seen as reference to casualties on the Chinese side.
The Chinese soldiers used stones, nail-studded sticks, iron rods and clubs in carrying out brutal attacks on Indian soldiers after they protested the erection of a surveillance post by China on the Indian side of the LAC in Galwan.
Pawar, a former defence minister said diplomatic channels should be used to defuse the tension, adding Chinese troops must be “evacuated” from the high ground in the Galwan valley.
He said that the Chinese army is occupying the high ground in the Galwan valley with a “specific objective of dominating the Dubruk-DBO road on the Indian side”.
Chinese troops can at any time decide to enforce closure of this road and India will have to pay a heavy military cost if that happened, the NCP chief said in the meeting.
Trinamool Congress supremo Mamata Banerjee said her party stands firmly behind the Union government in this hour of crisis and urged the Centre not to allow Chinese investments in strategically important infrastructure sectors.
The West Bengal chief minister said India “should and will” unitedly tide over the crisis, sources in her party said.
“We stand with the government in this hour of crisis. We will win. We will put up a united fight as one nation,” Banerjee was quoted as having told the meeting by a source in the TMC.
Opposition parties like the RJD, AAP and AIMIM reacted angrily over not being invited to the meeting and raised questions over the criteria for the invitation.
The two armies were engaged in a standoff in Galwan and several other areas of eastern Ladakh since May 5 when the two sides clashed on the banks of the Pangong Tso.
The situation in the area deteriorated after around 250 Chinese and Indian soldiers were engaged in a violent face-off on May 5 and 6. The incident in Pangong Tso was followed by a similar incident in north Sikkim on May 9.
The India-China border dispute covers the 3,488-km-long LAC. China claims Arunachal Pradesh as part of southern Tibet, while India contests it.
Prior to the clashes, both sides have been asserting that pending the final resolution of the boundary issue, it is necessary to maintain peace and tranquillity in the border areas. (PTI)