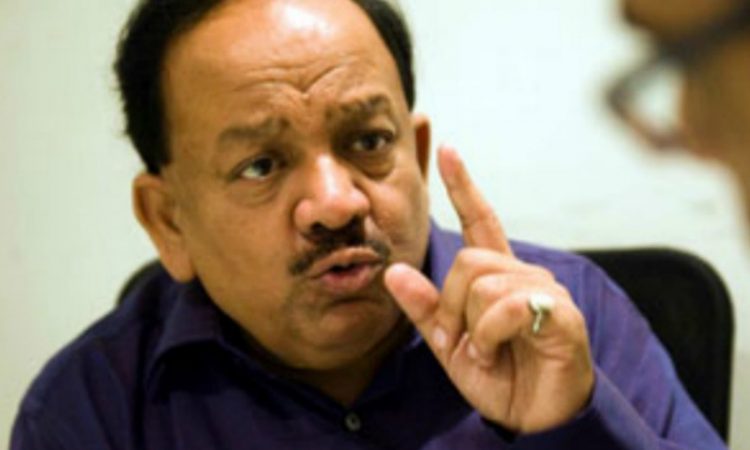 New Delhi, May 13: Nine states and union territories have not reported any new COVID-19 patients in the last 24 hours and the rate of doubling of cases has increased to 12.6 days, Union Health Minister Harsh Vardhan said on Wednesday, even as the death toll due to the novel coronavirus rose to 2,415 and cases climbed to 74,281.
Vardhan, who also reviewed the preparedness of Punjab for managing COVID-19, said Daman and Diu, Sikkim, Nagaland and Lakshadweep have not reported any cases so far.
While the doubling time of cases in the past 14 days was 11, it has improved to 12.6 in the last three days, he said.
“Today, there are nine states and union territories that have not reported any cases of COVID-19 in the last 24 hours i.E. A&N (Andaman and Nicobar) Islands, Arunachal Pradesh, Dadra and Nagar Haveli, Goa, Chhattisgarh, Ladakh, Manipur, Meghalaya, Mizoram,” Vardhan said, according to a statement.
As the death toll due to COVID-19 rose to 2,415 and the number of cases climbed to 74,281, registering an increase of 122 deaths and 3,525 cases in the last 24 hours till Wednesday 8 am, he said the fatality rate is 3.2% and the recovery rate is pegged at 32.8%.
However, a PTI tally of numbers announced by different states and union territories put the total number of cases at 75,144.
There has been a lag in the Union health ministry figures, compared to the number of cases announced by different states, which officials attribute to procedural delays in assigning the cases to individual states.
Elaborating on health infrastructure preparedness in the country, Vardhan said 900 dedicated COVID-19 hospitals with a capacity of 1,79,882 beds (1,60,610 isolation and 19,272 Intensive Care Unit (ICU) beds), 2,040 dedicated COVID-19 health centres with 1,29,689 beds (1,19,340 isolation and 10,349 ICU beds) and 5,577 COVID-19 care centres with 4,93,101 beds are available as of now.
Also, 8,708 quarantine centres are available till now, the statement said.
The Centre has also provided 78.42 lakh N95 masks and 42.18 lakh Personal Protective Equipment (PPE) to states, union territories and central institutions, Vardhan said.
The health minister added that as of Tuesday, 2.75% active COVID-19 patients were in ICU, 0.37% on ventilators and 1.89% on oxygen support.
Vardhan highlighted that testing capacity has increased in the country to 1,00,000 tests per day and a total 18,56,477 tests have been done so far for COVID-19 with 94,708 samples being tested on Tuesday.
So far 352 government and 140 private laboratories have been given approval for conducting COVID-19 tests, officials said.
According to the statement, Vardhan during the meeting appreciated the steps taken so far by the Punjab administration regarding stringent adherence to lockdown measures, meticulous contact tracing, screening of people in the containment areas and home delivery of essential services, items and medicines.
The number of active COVID-19 cases stood at 47,480 while 24,385 people have recovered and one patient has migrated, the Union health ministry said.
“Thus, around 32.83% patients have recovered so far,” a senior official of the ministry said.
The total confirmed cases include foreign nationals too.
A total 122 deaths were reported since Tuesday morning, of which 53 were in Maharashtra, 24 in Gujarat, 13 in Delhi, eight each in Tamil Nadu and West Bengal, four each in Rajasthan and Madhya Pradesh, two each in Telangana and Uttar Pradesh and one each in Andhra Pradesh, Punjab, Chandigarh and Puducherry.
Of the 2,415 fatalities, Maharashtra tops the tally with 921 fatalities, Gujarat comes second with 537 deaths, followed by Madhya Pradesh at 225, West Bengal at 198, Rajasthan at 117, Delhi at 86, Uttar Pradesh at 82,Tamil Nadu at 61 and Andhra Pradesh at 46.
The death toll reached 32 in Punjab and Telangana each.
Karnataka has reported 31 fatalities due to the respiratory disease, Haryana has registered 11, Jammu and Kashmir 10, Bihar six and Kerala has reported four deaths.
Jharkhand, Chandigarh and Odisha have recorded three COVID-19 fatalities each while Himachal Pradesh and Assam have reported two deaths each.
Meghalaya, Uttarakhand and Puducherry have reported one fatality each, according to ministry data.
More than 70% of the deaths are due to comorbidities, according to the health ministry’s website.
The Indian Council for Medical Research in a statement said nine hospitals have so far been approved to conduct randomised controlled clinical trials under the WHO’s ‘Solidarity Trial’ to find an effective treatment for the novel coronavirus disease
Four treatment protocols — Remdesivir, a combination of Lopinavir and Ritonavir, Hydroxychloroquine, and Lopinavir and Ritonavir with Interferon beta-1a — will be evaluated during the clinical trials across the selected hospitals, which include the AIIMS in Jodhpur, Apollo Hospital in Chennai, the Ahmedabad-based B J Medical College and Civil Hospital, and the Chirayu Medical College and Hospital in Bhopal. (PTI)