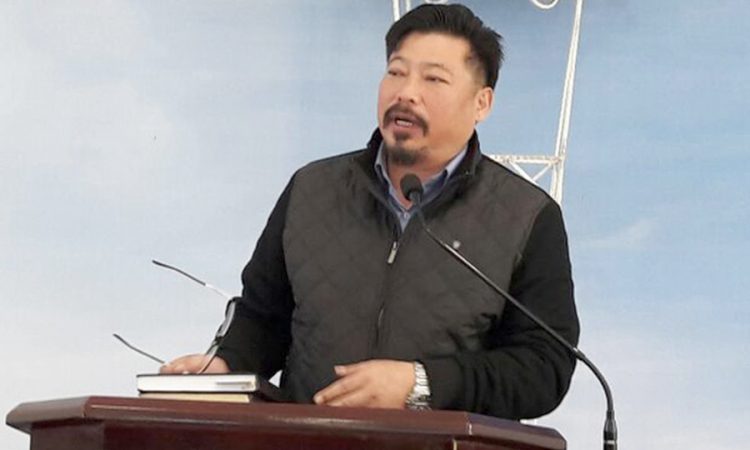 Dimapur, February 6: The NSCN (IM) has claimed that there is no meeting point between the Naga National Political Groups (NNPGs) and the “rest of the Nagas”, as the NNPGs want solution within the Constitution of India and settlement for only the Nagas of Nagaland whereas the NSCN (IM) is fighting for a “sovereign Naga nation”.

“They are for a colony state of India, and we are for the sovereign Naga nation. That is why there is no meeting point between the NNPG and the rest of the Nagas. However, for the sake of peace, the Government of India invited them to be part of the peace negotiations,” Chief of Naga Army/Longvibu General Anthony Ningkhan Shimray was quoted as having told the news portal EastMojo.
An EastMojo report quoted the Naga Lonvibu as having stated that once the NNPG accept settlement within the Indian Constitution their army will be demobilized, dissolved and merged with Indian security forces.
“Whereas the Naga Army is to reform into a modern army of the Naga nation. And to build a modern state, we are in peace talks with India. It is not to build a Hindustan state,” he was quoted as having said.
The report said Shimray after serving the Naga group for 40 years was promoted to ‘general rank’ in 2020, the first person to be promoted to the general’s rank after the formation of NSCN/GPRN.
On formal talks giving way to informal talks following difference over interpretation of the Framework Agreement between the NSCN (IM) and Centre’s Interlocutor, RN Ravi, the NSCN army chief maintained that informal meetings do not mean that progress is not being made. He said the Naga group under the leadership of Ato Kilonser Th Muivah and Prime Minister Narendra Modi are firmly dedicated to resolving the protracted Indo-Naga issues for the larger interest of both parties.
“Both sides are seriously committed to finding a solution. We are exploring means to find an amicable solution,” Shimray said.
Highlighting the importance of political talks, Shimray pointed out that real talks happen only when there is a conflicting issue. Since there are some conflicting issues between the GoI and the Nagas, both parties continue the talks to find a solution, he said.
Stressing on why the Naga group made its stand loud and clear on the symbols and their identity in the talks, Shimray said, “From our side, we are putting our best effort to find the solution. But that does not mean we will submit to a solution without our Naga flag and constitution.”
Since most of the components and competencies in the Framework Agreement (FA) has been hammered out and understood by both parties, we are venturing and exploring to come into a meeting point from our differences, he was quoted as having said.

Shimray, who was the political commissar of the Naga Army and currently the chief of Naga Army-MC (Military Cross), was recently felicitated by his village and the neighbouring villages of Tashar, the reported said. He also addressed a Tangkhul Naga leaders consultative meeting on Indo-Naga peace talks at Ukhrul and Kamjong districts.
Calling out his fellow Nagas to be united, the report said Shimray, at the consultation meeting, reasserted that “The plan of God for the deliverance and liberation of the Naga people have begun and it is about to finish.”
(Page News Service)