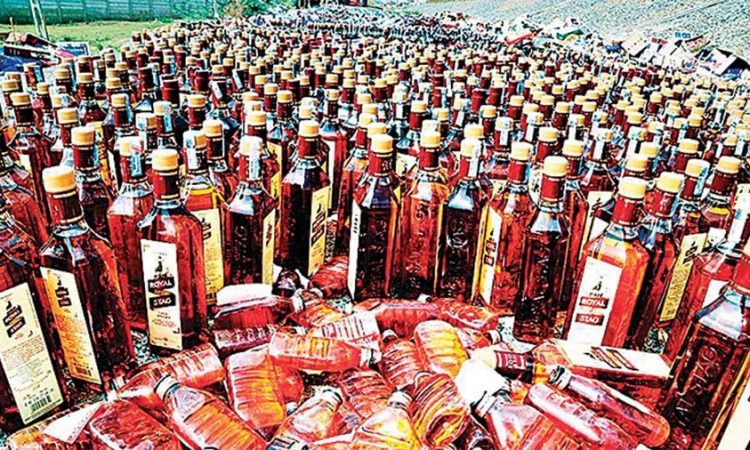 Kohima, May 1: Alcohol in Nagaland is a grey market since 1989 when the State Government imposed prohibition of India Made Foreign Liquor (IMFL) under the pressure of Nagaland Baptist Church Council (NBCC).
But the irony is IMFL is available in plenty in the State through well organized bootleggers. The Government has expressed its inability to check the flow of IMFL in the State and has been trying to convince the Baptist Church to lift the prohibition.
Even during this lockdown period, IMFL is available though prices have skyrocketed. Illegal godowns have not remained empty even during this period, when movement of vehicles has been stopped, except goods carriers. So how do the bootleggers manage to smuggle IMFL into the State? Authorities will have the answer.
Even after inter-state boundaries are sealed liquor flows into the State through Assam, according to sources. The main liquor hub for Nagaland are Lahorijan, Khatkhati and Bokajan in Assam and the borders are porous where bootleggers can easily smuggle in IMFL from these liquor hubs.
Fortunately there has been no case of alcohol related death in the State so far. But there has been massive decrease in consumption of alcohol during the last one month of lockdown. Due to the steep rise in prices of IMFL, people are resorting to local brew.
The price of MC Rum – the cheapest and the popular brand of the people is now costing up to Rs 1000 in the State capital and in Dimapur. A bottle of MC whiskey is now around Rs 1500. The price of beer ranges from 100 to 250. A bottle of MC Rum was costing Rs 2500 to Rs 3000 in far-flung areas.
Liquors flow into Nagaland from Assam, Manipur and from Myanmar, through porous international border.
The State Government passed the Nagaland Liquor Prohibition Act in 1989, but it has become a mockery as flow of IMFL has increased manifold through liquor barons and bootleggers. The IMFLs are easily available even in groceries, confectionery and garment shops, restaurants and hotels.
In a place like Kohima, even paan shops are doing brisk business in IMFLs. Several top militants have become bootleggers in Dimapur. There are also thousands of booze joints in Kohima and Dimapur alone where liquors of all brands are sold openly. The Government had prohibited sale of IMFL, but local brews like Zutho are exempted from prohibition.
The State is losing Rs 750 crore annually because of prohibition, but the NBCC, which says it would fight tooth and nail against lifting of prohibition, argues that life is more precious than Rs 750 crore.
The NBCC has criticized the State Government for encouraging and allowing free flow of liquor, particularly during important occasions and festivals. The Church claims that VIPs’ vehicles and police vehicles are also being used to ferry IMFL. But except the Baptist church, many organizations have come down heavily on the NBCC for failing to understand the ground realities.
The State Government had convened several meetings with the churches and the civil society organizations in an effort to lift the Prohibition Act, but the NBCC is standing its ground.
The World Health Organization (WHO) said in the times of lockdown during the COVID-19 pandemic, alcohol consumption can exacerbate health vulnerability, risk-taking behaviours, mental health issues and violence. WHO has reminded people that drinking alcohol does not protect them from COVID-19, and encouraged governments to enforce measures which limit alcohol consumption.
Alcohol consumption is associated with a range of communicable and non-communicable diseases and mental health disorders, which can make a person more susceptible to COVID-19. In particular, alcohol compromises the body’s immune system and increases the risk of adverse health outcomes.
Alcohol is also a psychoactive substance that is associated with mental disorders; people at risk or who have an alcohol-use disorder, is particularly vulnerable, especially when in self-isolation.
Meanwhile there is acute shortage of gutkas and tobacco products, and the prices have shot up beyond limit. (Page News Service)