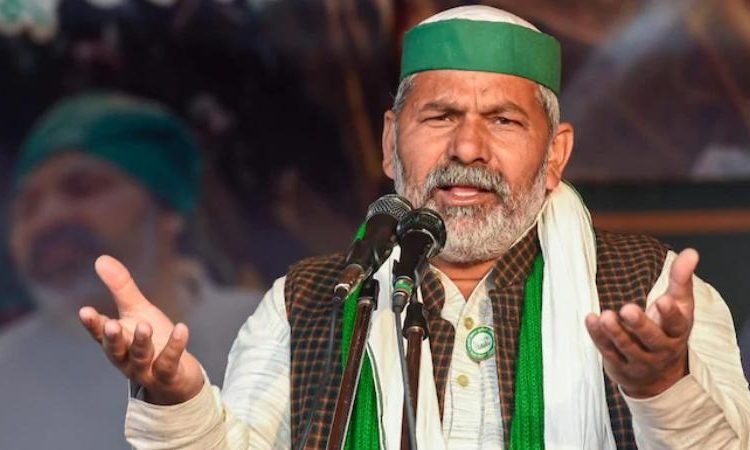 Charkhi Dadri (Har), February 7: Asserting that the agitation against the Centre’s farm laws is a people’s movement that will not fail, Bharatiya Kisan Union leader Rakesh Tikait on Sunday said there will be no “ghar wapsi” till protesting farmers’ demands are met.

Tikait lauded the role of “khap panchayats” (caste councils) and their leaders in supporting the farmers’ stir.
Addressing a “Kisan Mahapanchayat” near here, Tikait said the government should rollback the contentious farm laws, frame a new legislation to assure the continuation of the minimum support price (MSP) for crops and release the farmers arrested recently.
“There will be no ‘ghar wapsi’ till farmers’ demands are met,” he said.
“Yeh jan andolan hai, yeh fail nahi hoga (this is a people’s movement, this will not fail),” he added.
Tikait claimed the campaign against the agriculture laws is going strong. With many “khap” leaders present at the mahapanchayat , Tikait lauded their role in strengthening the stir.
Independent MLA from Dadri and chief of the Sangwan Khap, Sombir Sangwan, who in December withdrew his support to the BJP-JJP government in Haryana, dubbing it anti-farmer , was present at the event.
Earlier on February 3, Tikait had addressed his first Kisan Mahapanchayat in Haryana’s Kandela in Jind.
The BKU leader from Uttar Pradesh has been camping at Ghazipur on the Delhi-UP border as part of a campaign by farmer unions against the central laws enacted in September.
Tikait said that khaps go back to the days of King Harshvardhana and have been playing their role in society ever since.
The BKU leader said when the farmers’ stir started, attempts were made to divide it by calling it the agitation of Punjab and Haryana.
Seeking to project unity among farmer unions, Tikait said the “manch (stage) and panch (leaders leading the stir) will not change”.
The BKU leader, whose emotional appeal recently had revived the protest that was losing momentum after the January 26 violence in Delhi, said people from different section of society were leading and part of the stir.
Cautioning the protesting farmers, Tikait said “Some people will try to divide you as Sikh, non-Sikh” but they should remain united.
Tikait again praised BKU leader from Punjab, Balbir Singh Rajewal, who was present on the occasion, for providing a sound leadership to the stir.
“Rajewal is our big leader, he is very wise. We will fight this battle strongly,” he said.
Tikait also made a mention of the tragedy caused by a glacier burst at Joshimath in Chamoli district of Uttarakhand, leading to a massive flood in the Dhauli Ganga river and causing large-scale devastation in the upper reaches of the ecologically fragile Himalayas.
“A big tragedy has struck Uttarakhand. I appeal to the BKU family and other farmer organisations to lend a helping hand and assist the local administration,” he said.
He appealed to all to conserve water and plant trees to protect the environment.
Meanwhile, taking a lesson from the Jind Mahapanchayat where the stage had collapsed, the organisers had brick-lined the stage this time.

Thousands of farmers have been protesting since late November 2020 at Delhi’s borders with Haryana and Uttar Pradesh, demanding a rollback of the Farmers’ Produce Trade and Commerce (Promotion and Facilitation) Act, 2020; Farmers’ (Empowerment and Protection) Agreement on Price Assurance and Farm Services Act, 2020; and the Essential Commodities (Amendment) Act, 2020.
The protesting farmers have expressed apprehension that these laws would pave the way for the dismantling of the minimum support price (MSP) system, leaving them at the “mercy” of big corporations.
However, the government has maintained that the new laws will bring better opportunities to farmers and introduce new technologies in agriculture. (PTI)