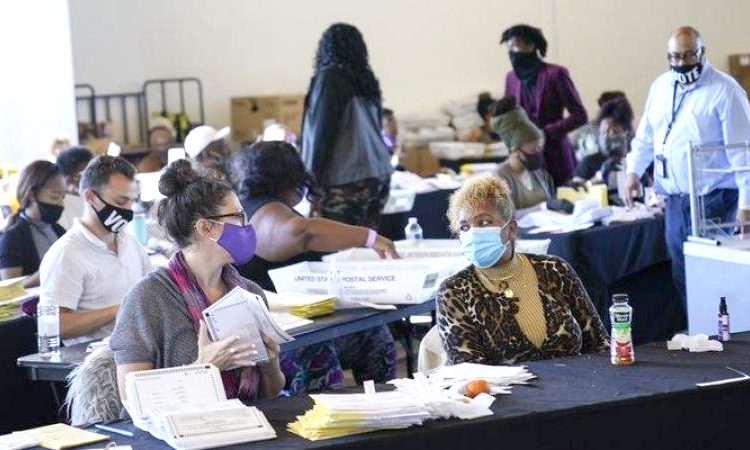 Election officials say the poll worker in the video did not crumple or discard a ballot. (Photo | AP)

PHILADELPHIA, NOVEMBER 12: Election officials in dozens of states representing both political parties said that there was no evidence that fraud or other irregularities played a role in the outcome of the presidential race, amounting to a forceful rebuke of President Trump’s portrait of a fraudulent election.
Over the last several days, the President, members of his administration, congressional Republicans and Right-wing allies have put forth the false claim that the election was stolen from Trump and have refused to accept results that showed Joseph R Biden Jr. as the winner.
But top election officials across the country said in interviews and statements that the process had been a remarkable success despite record turnout and the complications of a dangerous pandemic.
“There’s a great human capacity for inventing things that aren’t true about elections,” said Frank LaRose, a Republican who serves as Ohio’s Secretary of State. “The conspiracy theories and rumours and all those things run rampant. For some reason, elections breed that type of mythology.”
Steve Simon, a Democrat who is Minnesota’s Secretary of State, said: “I don’t know of a single case where someone argued that a vote counted when it shouldn’t have or didn’t count when it should. There was no fraud.”
“Kansas did not experience any widespread, systematic issues with voter fraud, intimidation, irregularities or voting problems,” a spokeswoman for Scott Schwab, the Republican Secretary of State in Kansas, said in an email on Tuesday. “We are very pleased with how the election has gone up to this point.”
The New York Times contacted the offices of the top election officials in every state on Monday and Tuesday to ask whether they suspected or had evidence of illegal voting. Officials in 45 states responded directly to The Times. For 4 of the remaining states, The Times spoke to other statewide officials or found public comments from Secretaries of State; none reported any major voting issues.
Statewide officials in Texas did not respond to repeated inquiries. But a spokeswoman for the top elections official in Harris county, the largest county in Texas with a population greater than many states, said that there were only a few minor issues and that “we had a very seamless election”.
On Tuesday, the Republican Lieutenant Governor in Texas, Dan Patrick, announced a $1 million fund to reward reports of voter fraud.
Some states described small problems common to all elections, which they said they were addressing: a few instances of illegal or double voting, some technical glitches and some minor errors in math. Officials in all states are conducting their own review of the voting ~ a standard component of the certification process.
Perhaps none of the Trump campaign’s claims received more attention than an allegation made over the weekend in Pennsylvania by Rudolph W Giuliani, the President’s personal lawyer. On Saturday, Giuliani held a news conference in the parking lot of a Philadelphia landscaping company and claimed that the election in the city had been rife with fraud.
The office of the state’s top law enforcement official said that there was no evidence to support Giuliani’s claims, and that the election in the state was “fair and secure”.
“Many of the claims against the commonwealth have already been dismissed, and repeating these false attacks is reckless,” said Jacklin Rhoads, a spokeswoman for Josh Shapiro, a Democrat who is Pennsylvania’s Attorney-General.
“No active lawsuit even alleges, and no evidence presented so far has shown, widespread problems.” (NYTNS)