Assures Govt. willing to provide vaccines to all
KOHIMA, MAY 17: Nagaland is witnessing a rush among people in the age group of 18-44 years to get COVID-19 vaccine, but unsuccessful attempts to get vaccination slot have left many disappointed and suspicious of mismanagement and favouritism by the Health & Family Welfare Department.

For an estimated population of over 8 lakh population in the age group of 18-44 years in Nagaland, the State has received a total of 38,580 doses of Covishield on payment of Rs 1,15,74,00 from Serum Institute of India, as allocated by Ministry of HFW.
It was received on May 12 and allocated to the districts based on the population and consumption, while registration and booking of vaccine slots started on May 14.
Briefing media persons after the launch of vaccination drive, State Immunization Officer, Dr Ritu Thurr and Deputy Director HFW, Dr GR Rio said that the State’s 18-44 age population is about 37% of the total population.
The Government has placed an order for 4 lakh doses for vaccination for this phase, but it would be received in phase-manner and the dates for next vaccination cannot be predicted, Dr Thurr said.
Asked about allegations of Health Department officials prioritising their own family members to get vaccinated in this age group, Thurr said registration and booking has to be done through an online portal, which is being managed by UNDP and the Department cannot mismanage it in any way.
The district-wise distribution of the vaccines: Dimapur-6500, Kohima-5,080, Mon-4,000, Tuensang & Mokokchung-3,500 each, Wokha, Zunheboto & Phek-3,000 each, Peren-2,000 and Kiphire & Longleng-1,500.
On citizens’ inability to register online or book vaccine slot, an official unwilling to be identified, said that one has to first get registered on the CoWIN portal or Arogya Setu App and book the date of vaccination whenever the slots are open.
There cannot be mismanagement or favouritism in booking of vaccine slots as it is open to all and depends on the speed of connectivity, the official said, adding that “no advance booking is possible”.
The portal is not controlled by politicians, administrators or bureaucrats, but by those who are quick in using the technology, he said, adding that one only needs to know when the booking is open.
The availability of vaccine slot in every health unit will always be made public through various media including newspapers, he said, adding the CoWIN portal is in public domain and no one can mismanage it.
The official also affirmed that the free vaccines provided by the Central Government for other groups ~ healthcare workers and high risk groups (persons above 45 years of age) cannot be used for the 18-44 year age group because the free vaccines have batch numbers and it is to be given accordingly, he said.
The present 36,580 vaccines can be given within a week but due to the shortage of vaccine faced throughout the country and uncertainty over when the next consignment of vaccines for this age group would be received by the State, the Department has strategized the vaccination of the available doses in such a manner that it would continue till the vaccine arrives for second dose, which is 12-16 weeks, he said.
The process will continue and no one will be denied vaccination in the 613 sites spread throughout the State, he asserted.

No adverse effect
On the vaccination drive for high risk group, which Nagaland launched on January 16, 2021, Dr Ritu Thurr said there has not been any major adverse event or deaths reported, except for 38 minor cases among those inoculated.
Thurr also informed that currently the State has around 92,000 doses of the free vaccines provided by the Central Government, while 14,550 vaccine doses would be received by this week.
(Page News Service) 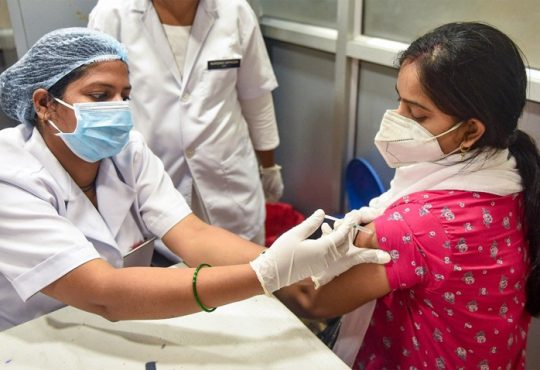