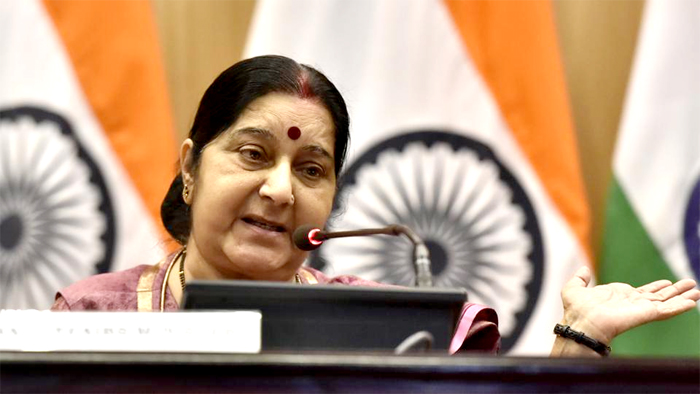 NEW DELHI, March 13: External affairs minister Sushma Swaraj on Wednesday said India cannot have dialogue with Pakistan unless the neighbouring country acted against terror outfits on its soil, asserting that “talks and terror cannot go together”.
Talking on ‘India’s World: Modi Government’s Foreign Policy’, she stated that Pakistan needs to control the ISI and its army who are bent on destroying the bilateral relations time and again.
“We do not want talk on terror, we want action on it. Terror and talks cannot go together,” she said.
Swaraj also questioned Pakistan’s retaliation to the Indian air strikes in Balakot when, she said, India had specifically targeted the terror outfit Jaish-eMuhammed (JeM).
“Why did the Pakistani military attack us on behalf of JeM? You not only keep JeM on your soil, but fund them and when the victim country retaliates, you attack it on the terror outfit’s behalf.”
“If Imran Khan (Pakistan prime minister) is so generous and a statesman, he should give us Masood Azhar,” she said.
The external affairs minister said India can have a good relationship with Pakistan, provided the neighbouring country “takes action against terror groups on its soil”.
On her invitation to the Organisation of Islamic Cooperation (OIC) meeting, she said India avenged the humilation meted out to it 50 years ago by becoming the ‘guest of honour’ at the OIC meet this year.
“In 1969, India was humiliated when it was not allowed to participate in the meeting even after reaching the venue after Pakistan protested against India’s then foreign minister’s participation. But now, 50 years later, it was India that was on the seat of the guest of honour, while Pakistan’s seat was empty,” she said.
Pakistan foreign minister Shah Mahmood Qureshi had expressed reservations about the invitation to Swaraj for the OIC meeting, and later decided to boycott the meeting of the 57-member Muslim grouping held earlier this month.
Talking about the foreign policy of the current government, Swaraj said it was based upon the two principles of “national interest supreme” and “world is our family”.
“People often ask us what we get by our frequent travel to countries. I want to tell them we do not travel to have fun, we travel to build our relationship with other countries and it is because of our ties with these countries that we were able to rescue 7,000 people from Yemen. The strength of our bilateral ties was also reflected in the International Court of Justice (ICJ) elections,” she said.
“I have seen the strength of this relationship time and again,” the senior BJP leader said, adding that at the ministerial level, Indian leaders have visited 189 out of 193 countries.
Swaraj added that the country’s global profile has improved in the last five years. (PTI)