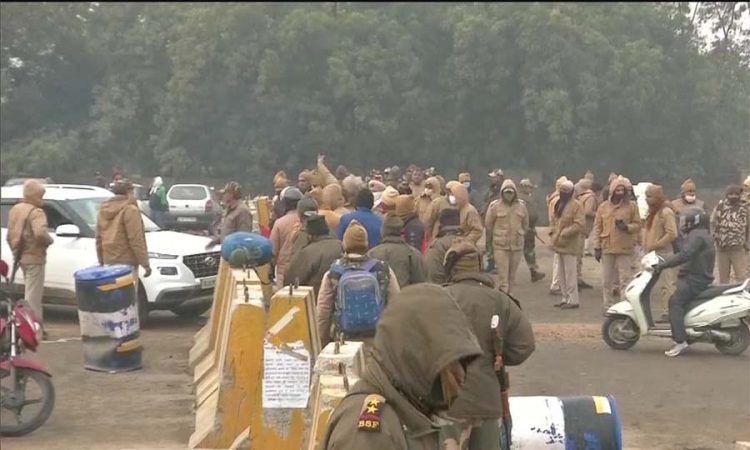 New Delhi/Ghaziabad, February 5: Protesting farmers will not block roads in Delhi, Uttar Pradesh and Uttarakhand during the nationwide ‘chakka jam’ on Saturday even as agitating unions asserted that peasants in other parts of the country will block national and state highways for three hours but in a peaceful way.

The Samyukt Kisan Morcha, an umbrella body of the farmer unions protesting the three farm laws, said emergency and essential services such as ambulance and school bus will not be stopped during the ‘chakka jam’ that is proposed to be held between 12 pm and 3 pm.
Bharatiya Kisan Union leader Rakesh Tikait said that there will no road blockade in Uttar Pradesh and Uttarakhand on Saturday, but added that farmers in these two states can be called to the national capital any time and that they have been kept on standby.
Talking to reporters at the Ghazipur protest site, Tikait said that farmers in small groups will submit a memorandum to district headquarters in Uttar Pradesh and Uttarakhand.
Thousands of farmers, mostly from Punjab, Haryana and western Uttar Pradesh, have been camping at three Delhi border points — Singhu, Tikri and Ghazipur — for over 70 days, demanding a complete repeal of three central farm laws.
“There will be no chakka jam programme inside Delhi since all the protest sites are already in a chakka jam mode. All roads for entering into Delhi will remain open except where farmers’ protest sites are already located,” the SKM said in a statement.
In a bid to avoid what happened during farmers’ tractor parade on Republic Day, the Delhi Police has taken additional measures this time, including tightening security and intensifying vigil at the city’s border points, to deal with any situation emerging out of the ‘chakka jam’, officials said.
Delhi Police Commissioner S N Shrivastava also held a meeting with the senior officers of the force and reviewed the security arrangements.
After the January 26 violence that had left over 500 security personnel injured and one protestor dead, Shrivastava had accused the protesting union leaders of betrayal and breaching agreement as thousands of peasants deviated from their pre-decided routes for the tractor parade.
Tens of thousands of farmers atop tractors had broken barriers, clashed with police and entered the city from various points to lay siege to the Red Fort and climb the flagpole on Republic Day.
On Friday, Darshan Pal, a senior member of Samyukt Kisan Morcha, said that ‘chakka jam’ will remain completely peaceful and non-violent, adding that protesters have been asked to not to indulge in any conflict with government officials or any citizen.
The SKM had earlier this week announced this nationwide chakka jam on Saturday, saying that farmers would block national and state highways for three hours in protest against the Internet ban in areas near their agitation sites, harassment allegedly meted out to them by authorities, and other issues.
According to the SKM, the chakka jam will conclude at 3 pm by blowing vehicle horn for one minute, a move that is aimed at expressing support and solidarity with the farmers.
Security at Singhu, Tikri and Ghazipur borders has been tightened by deploying extra forces and putting up multi-layered barricades, barbed wires and nails studded on the roads.
Elaborating about the security arrangements for the proposed ‘chakka jam’, Delhi Police PRO Chinmoy Biswal said in view of the violence that took place on January 26, adequate security arrangements have been put in place by the Delhi Police at the borders so that miscreants are not able enter the national capital.

“We are monitoring content on the social media to make sure rumours are not spread against the police. The protestors are camping at the borders of Delhi. We are in touch with the police force of other states also,” he added.
A senior police officer said to prevent any kind of law and order situation and disruption of normal life during the ‘chakka jam’, adequate forces are being deployed across the outer-north district of Delhi Police.
The Ghaziabad district administration has also taken additional measures in view of ‘chakka jam’.
An official said that the district has been divided in six sectors and the magistrates and their counterpart police officials have been deployed to avoid any untoward incident. (PTI)