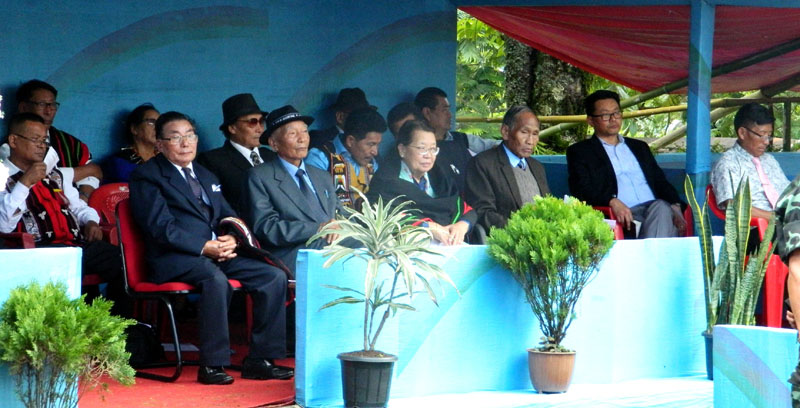 Kohima, August 14: The Naga National Council (NNC) on Tuesday categorically stated that Nagaland comprises of all territories inhabited by the Nagas and that it will not recognise any artificial boundaries.
Speaking at the 72nd Naga Independence Day at Chedema Peace Camp, some 10 km from the State capital, Kedahge of Federal Government of Nagaland (FGN), Gen (Retd), Viyalie Metha said the facts and timely actions taken stands as irrefutable testimony to the collective wish to be a sovereign and independent country. “We have also taken solemn oaths before God and man that we would never forsake these historical and political actions undertaken by us. These oaths were taken through a historic national events like the National plebiscite of May 16, 1951 and the Lakhuti resolution of April 27, 1955.
“Any person or persons who in order to destroy or undermine the integrity and the well-being of Nagaland and who for this purpose act, abet or set up organisations against or oppose the political, administrative and traditional institutions of the nation-or attempt to do so, whether with or without the aid of other country or countries, shall be deemed to have committed treason,” the Lakhuti resolution stated.
Metha said the current stand of the FGN is to recognise the fact that the Indo-Naga conflict remains unresolved due to the invasion and continued occupation of Nagaland by India and Burma.
“The Federal Government of Nagaland has not entered into any agreement with India other than 1964 ceasefire agreement which became effective on 6th September 1964. This international ceasefire agreement was signed between the Federal Government of Nagaland and the Government of India through the Nagaland Peace Mission,” he added.
The FGN Kedahge said on the part of his government knowing the fact that too many lives were lost due to the armed conflict in a period of almost ten years from 1954 to 1964, the Naga people gave their consent for a ceasefire and are upholding the same till today. But he said successive leadership of the Indian Government continued to pursue a violent policy rather than peacefully resolving the conflict adding the policy of the NNC is non-violence and the FGN is still upholding to that policy.
He said long drawn Naga political conflict is not an Indian internal law and order problem and that Nagas are not secessionists or insurgents. “The conflict is an international conflict of invasion by India and Burma. Nagas are only defending the Naga Nation. Therefore the conflict can only be resolved from an international level,” Metha asserted.
Defending his organisation the FGN Kedahge said NNC and FGN are the only two nationally mandated institution and established Government to uphold the historical and political rights of the Naga nation. He said NNC/FGN will not recognise any faction or organisations that may commit Naga citizenship to any other country and vowed to protect Naga sovereignty and independence.
“Coming to the question of so-called integration of all Nagas territories under one single political umbrella, it is hereby made clear to all concerned that Nagas were an integrated nation even before the official proclamation of their Federal Republic on March 22, 1956. In this connection Nagas have always been an integrated nation occupying a continuous Naga territory throughout all the aeons of human history. These two facts of Naga anthropology and geography form the basis of Naga nationhood. Therefore the NNC and FGN will consider any acts of integration Naga territory under the constitution of any foreign country as acts of treason against the nation.”
Metha said based on the historical facts of having inhabited native land for over two thousand years Naga people declared independence on August 14, 1947, adding that prior to that Naga people existed as a free country owing no allegiance to any foreign nation.
Conflict between Nagaland and India is a clear case of illegal invasion: Adinno
“The conflict between Nagaland and India is a case of a clear illegal invasion by India,” she said adding that “Nagas are not Indians and Nagaland is not Indian Territory”, said NNC president Adinno Phizo.
Adinno said, “whether others acknowledge or not, Nagas have a unique history because they never entered into any treaty that has bound them in any legal connection to any other country”.
“We say, ‘Urra Uvie’, (Our Country belongs to us),” she said recalling that the invasion and occupation of Nagaland by India started in 1954 and the war was fought till the international Ceasefire Agreement was signed between the Federal Government of Nagaland and the Government of India on September 6, 1964.
Nonetheless, she lamented that till today, India’s Armed Forces are still occupying Nagaland with the power of the so-called Armed Forces Special Power Act, 1958.
“Nagas are not demanding anything from India,” she said while reiterating that the Naga stand is not a “Political Movement” either because Nagas are simply defending their country and the only say by Nagaland to India is to leave Nagaland in peace.
“We are thankful to Almighty God for guiding our people in all difficult situations which were unprecedented. The national foundation was laid by the Naga National Council. Without a foundation, one cannot build a house, but with our national foundation in place, the Naga people have been able to uphold our right up to this day,” she said.
The programme was attended by host of senior members of NNC/FGN.
On the occasion folk songs and folk dances were performed by Chakhesang Region, Ao, Region, Kuki Tribal, Chang Region, Shepoumaramth Region , Zeliangrong Region and Khiamniungan Region. (Page News Service)