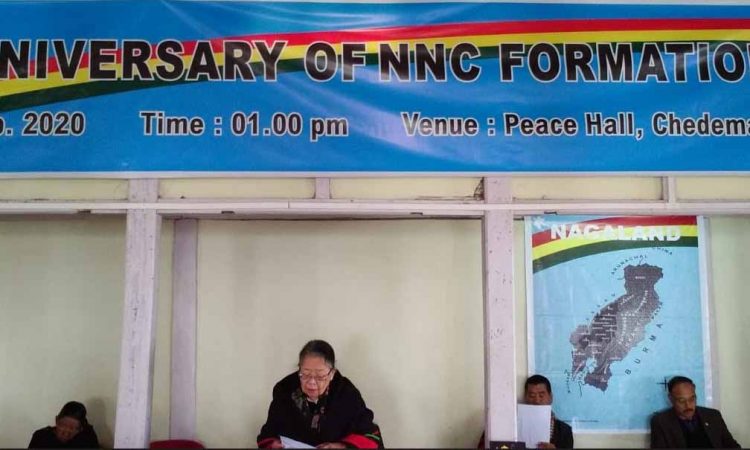 Kohima, February 2: The Naga National Council (NNC) today observed 74th anniversary of its formation with a call to the Nagas not to fail our forefathers and the past generations who have handed down this beautiful land to the present generation.
The NNC was launched 74 years ago on February 2, 1946.
In her address at Peace Hall, Chedema, NNC president Adinno Phizo tribalism was not an issue among Naga people earlier but it came about due to rise in job seekers among educated Nagas.
“At that time, the Naga people need to have a name to represent them and that is how the name Naga National Council came about. During that time we have a country of many regions (tribes) but each have different system and culture as it is today. But there is no issue of “tribalism” among the people; this concept of tribalism came about only after some job seekers among educated people arise,” she said.
Stating that NNC is not a political party or a government, but an institution of the Naga people, she maintained in that sense “all Nagas are NNC members”.
Reminding that the present struggle has been going on for 73 years, she said in 1947, when Great Britain relinquished her power in our region, India immediately forgot her past and went on to take over the small  country Nagaland. “They brought in wars but the Nagas defended their country. Consequently India signed ceasefire agreement with the Federal Government of Nagaland in 1964, but later India abrogated the ceasefire in 1972.”
“They also tried to drive out the people and burnt down their villages, but the Nagas came back and built their villages, helping one another in community spirit. During those periods, Nagas suffered immensely and died in the hands of Indian armed forces who tried to crush the Nagas,” she recalled.
Adinno Phizo said the Indian Government has been extending the Armed Forces Special Power Act every six months since its promulgation in 1958 and orders her armed forces to occupy Nagaland till today.
“The history of Nagaland is clear that Nagas are not demanding anything from India. It is not a political problem. Nagas love their country and they want peace. Reason must prevail,” she added.
Earlier, Alhouii Dziivichii also exhorted the gathering.
The programme was led by NNC vice president B.Pashen while dedicatory prayer for NNC platinum jubilee was pronounced by Rev. Savito Nagi.
(Page News Service)