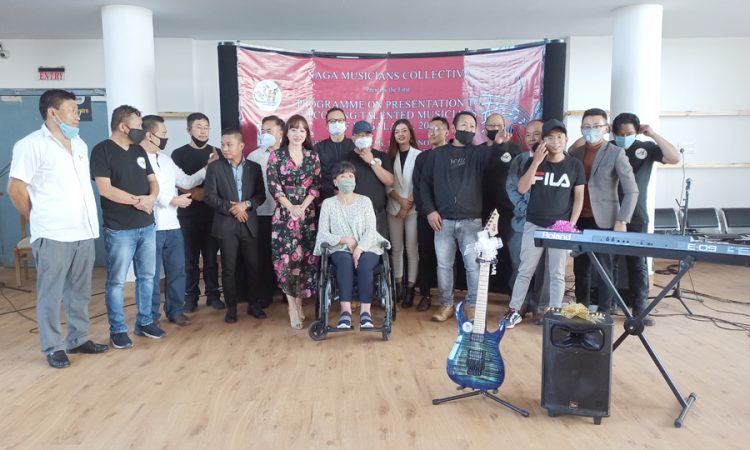 Our Correspondent
KOHIMA, OCTOBER 30: Naga Musicians Collective (NMC), a group of like-minded musicians presented musical instruments to upcoming talented musicians of Nagaland at Regional Centre for Excellence in Music and Arts (RCEMPA), Kohima, on October 30.
The recipients of the award, Imnaienla Jamir, were given an electric guitar, Muno Shiu, a vocal microphone and an Mpro speaker, and an electric keyboard to Kilang Jamir.
Taking the exemplary life of U2 front man, Bono, State Commissioner for Persons with Disabilities (PwD), Diethono Nakhro impressed on the recipients of the award to use their musical talents because it has the power to change the world.
Nakhro lauded the initiative taken by NMC stating that the music, arts and creative profession in Nagaland did not have the encouragement and support it needed a few years back.
However, it is very encouraging to see societies like NMC taking up the initiative to support upcoming musicians basing their actions on the hurdles and experiences they had as musicians, she added.
Stating that while there is nothing abnormal or extraordinary about being disabled, Nakhro also expressed that she was so pleased to know Kilang Jamir was one of the recipients not because of his disabilities but for the reason that he is standing up as a role model for other.
However, there are still a lot of misconceptions and misunderstandings about disabilities in our society, Nakhro said. In present times, a lot of negative attitude about disability such as bullying and the humiliation that Kilang Jamir had to go through growing up, this is something which disabled people experience on a daily basis, she added.
Also speaking at the event, Advisor Task Force for Music & Arts (TaFMA), Theja Meru said it has been our top most priority to be inclusive in everything we do ever since TaFMA was launched. In this regard, we have members working with PwDs from across the state through projects such as “Open House” and all, he said.
Speaking about Nagaland in terms of the destination it wants to reach in music and arts, Meru said, “We are headed to a destination of truly making Nagaland a centre of all things music and musical.”
While lauding the initiative of NMC in supporting upcoming musicians, Meru further encouraged NMC to continue the good work and become something larger than life where every young musician will aspire to receive the award from NMC.
Formed in 2009, Naga Musicians Collective is a group of like-minded musicians of the ’80s, who after having gone through so many obstacles themselves in the arena of music, especially with the almost non-existence of proper instruments, sound systems, lack of internet facilities, and the high cost of imported equipments as India was then yet to make reformations in its foreign trade policies, they got together so that they can lend a helping hand to upcoming musicians in the State, particularly those from poorer section of the society.
NMC is a registered music society and has built up good symbiotic relationships with the State’s Task Force for Music & Arts (TaFMA). NMC had its first mega concert in partnership with TaFMA during October 25 and 26, a tribute concert for musician friends from their era.