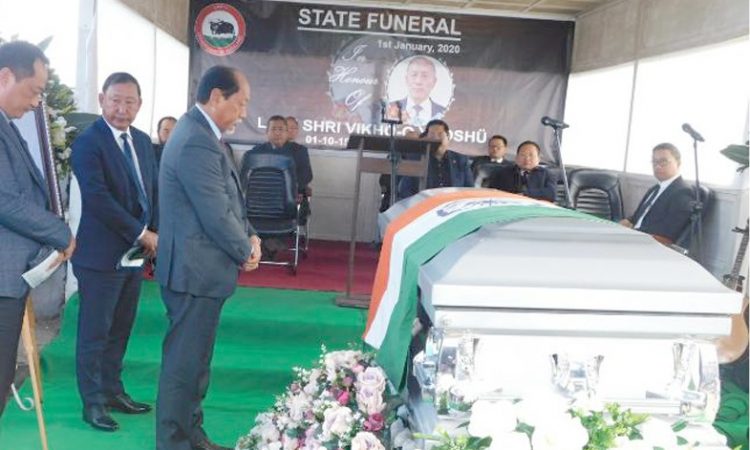 Kohima, January 2: Nagaland on Wednesday bid tearful farewell to Late Vikho-o Yhoshu, Speaker of Nagaland Legislative Assembly with full State honours.
Born on October 1, 1951, Yhoshu died following a prolonged illness while undergoing treatment for lung cancer at a hospital in Mumbai Monday morning. He is survived by his wife, 10 children and seven grand-children.
Besides the family members, thousands of people including Chief Minister Neiphiu Rio, Deputy CM, Y Patton, NLA speaker in-charge Sharingain Longkumer, Opposition party leader T R Zeliang, leaders of political parties, bureaucrats led by Chief Secretary Temjen Toy and general public from different walks of life attended the State funeral service held at the official residence of the Speaker in Old Minister’s Hill here.
Yhoshu’s last funeral rites were performed at Kimipfiiphe Ground of his native village in Kigwema while his mortal remains were laid to rest at the family home in Khamima.
Conveying condolences to the bereaved family members during the State funeral, NLA deputy speaker Sharingain Longkumer said it was shocking to learn about the sad demise of the Speaker.
Late Speaker was a learned and diplomatic leader, who convened Assembly sessions on Naga political issue, he said. He described him as a sincere, meticulous and articulate in the dispensation of responsibility as the Speaker of the House.
His demise has created a vacuum which will be difficult to fill, he said.
Chief Minister Rio said it is very sad day. He conveyed grief and sorrow on behalf of the State and the public. He described Late Vikho-o Yhoshu, as kind hearted and highly capable person. There are only few Nagas who have achieved such standard in service at the Centre and in the State Government as a technocrat and also an elected leader, he said adding that his demise is a great loss to the State.
Paying respect to the departed soul, Rio on a personal level, said their association grew stronger over the years as they worked together for the people since 2008. A fine gentleman and humble person who always had concern for the Nagas and the indomitable Naga-ness in him was the main driving force behind his service to the people, Rio said.
“I value his commitment to the Government and the people as the most trusted legislator of the 13th House. He will always be remembered fondly,” the CM added.
Deputy CM and BJP legislature party leader, Y Patton described Yhoshu not only was a true son of Kigwema but also the Nagas in general.
Opposition leader Zeliang expressed sadness that Late Yhoshu has left the Nagas too early.
He lauded the efforts of Yhoshu for maintaining neutrality in the Assembly. Late Yhoshu lived an exemplary life, he said while also describing him as a man of truth and humble person.
Chief Secretary Temjen Toy and leaders of various political parties also spoke eulogies for the departed leader while on behalf of family Late Yhoshu’s daughter Sesino Dimasha and Dr Akho Yhokha expressed gratitude to all for the support.
Angami Baptist Church Council executive secretary Rev Dr Atsi Dolie delivered the funeral message. (Page News Service)

PM condoles
Dimapur, January 2: Prime Minister Narendra Modi has condoled the passing away of the Speaker of Nagaland Assembly, Er Vikho-oYhoshu.
“Anguished by the demise of the Speaker of Nagaland’s Assembly, Er Vikho-o Yhoshu. He was a diligent leader who devoted his life towards the progress of Nagaland. My thoughts are with his family and supporters in these moments of sadness. May his soul rest in peace,” the Prime Minister tweeted on December 31 morning.
(Page News Service)