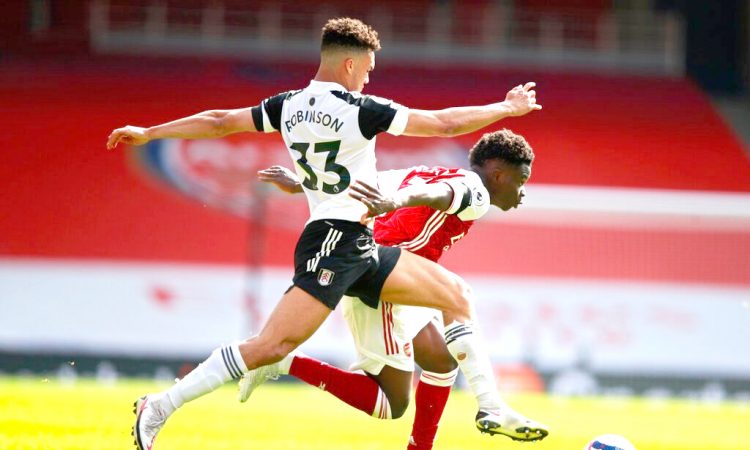 LONDON, April 18: Arsenal substitute Eddie Nketiah struck deep into stoppage time to cancel out Josh Maja’s second-half penalty in a 1-1 draw with relegation-threatened Fulham in the Premier League on Sunday.

Fulham, 18th in the table, had been on the verge of a first ever win away to Arsenal at the 30th attempt.
Arsenal had the ball in the net twice in the first half but both were ruled out for offside, with Dani Ceballos’s effort chalked off following a very tight VAR decision.
Fulham went ahead when Brazilian defender Gabriel was adjudged to have tripped Mario Lemina and Maja fired his penalty into the roof of the net in the 59th minute.
Gunners substitute Nicolas Pepe almost got his side level in the 71st minute, but keeper Alphonse Areola instinctively flicked out a foot to keep his header out and the danger was cleared.
Arsenal dominated possession and created plenty of chances before Nketiah struck in the seventh minute of stoppage time, reacting quickest to slam home the rebound from a Ceballos shot as another late goal broke Fulham’s hearts.
“I’m delighted to get a goal and salvage a point for the team,” Nketiah told Sky Sports.
“Credit to Fulham for getting back in the game and getting the goal, but we were good in the last 30 minutes and we deserved at least a point,” he added.
Arsenal are ninth on 46 points and the concession of another late goal left Fulham third-bottom of the table on 27 points, six behind Burnley, who play Manchester United later on Sunday, and Brighton & Hove Albion.