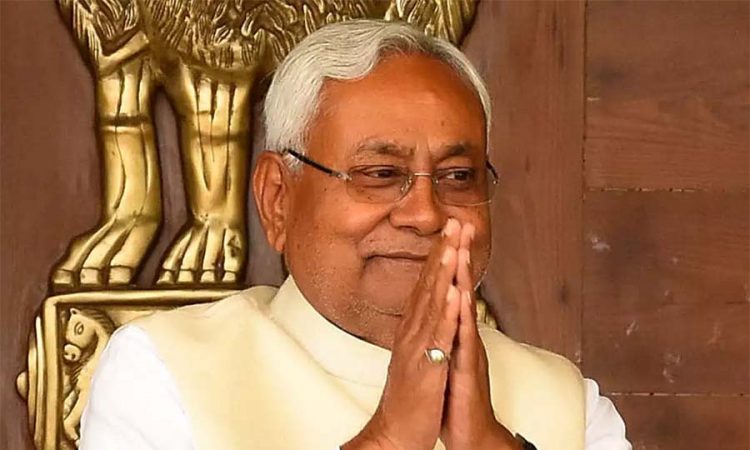 Patna, November 15: The NDA on Sunday chose JD(U) president Nitish Kumar for another term as the Chief Minister of Bihar even as suspense hung over the fate of his most trusted man in the BJP Sushil Kumar Modi who has served as his deputy for major part of his tenure so far.
Kumar’s name was announced at 1, Anney Marg, the Chief Ministers official residence, by Defence Minister Rajnath Singh who had been sent from Delhi as the “observer” for the BJP, which has returned with the highest number of seats in the NDA in the assembly elections.

“Nitish Kumar was unanimously elected as the NDA legislature party leader. Our MLAs Tarkishore Prasad and Renu Devi were respectively elected as the leader and deputy leader of the BJP legislature party”, Singh told reporters later.
Kumar, who met Governor Phagu Chauhan along with leaders like BJP state president Sanjay Jaiswal to stake claim for the formation of a new government, said the swearing in would take place “tomorrow, between 4 and 4.30 P.M.” and curtly replied “it will be decided in due course” when asked who were likely to take oath as members of his state cabinet.
Rajnath Singh, a former BJP national president, who was accompanied by Sushil Kumar Modi for most part of his day-long visit, however ducked queries about who would be the new Deputy CM.
“You will come to know about it at an appropriate time”, said Singh even as Modi himself dropped ample hints about the happenings within the party.
The senior BJP leader, who is an avid user of social media, had his designation as Deputy CM dropped from his Twitter handle.
He also congratulated Tarkishore Prasad and Renu Devi and came out with a cryptic tweet about his own future in the BJP.
“Few might have got from the BJP and the RSS as much as I did in my 40 years of political career. I will fulfill whatever responsibility that comes my way in future. Nobody can, after, all, snatch away from me the post of a party worker”, Modi said in the tweet.
Union minister Giriraj Singh, considered one of the detractors of Nitish Kumar in the BJP and not known to be on the best of terms with Sushil Kumar Modi, came out with a tongue in cheek response.
“Respected Sushil Kumar Modi ji, you are a leader, you held the office of Deputy CM and will remain a BJP leader. One does not become great or small because of a post”, Singh tweeted.
The names of Tarkishore Prasad, a Vaishya who is known to be close to Sushil Modi, and Renu Devi an Extremely Backward Caste (EBC) who was formerly the partys national vice president kept doing the rounds for the Deputy CMs post though no official confirmation came till late in the evening.
Speculations about Prasad grew stronger late in the evening as he drove to the Chief Ministers office alongside BJP national general secretary in charge of the state Bhupendra Yadav and former Maharashtra Chief Minister Devendra Fadnavis who was made the partys in charge for the assembly elections.
Prasads residence in Katihar was also abuzz with murmurs of “badi zimmedari” (big responsibility) even as family members were busy lighting candles by way of celebration.
Prasad himself refrained from divulging much as in reply to persistent queries from journalists he said little more than “I shall function in whatever capacity my party asks me to”.
There were also speculations that Bihar might go for two Deputy CMs like in neighbouring Uttar Pradesh and Prasad and Renu Devi might be elevated as a step in that direction.
The proposed replacement of Sushil Kumar Modi called “Chhota Modi” in the political circles of Bihar, a jocular reference to the surname he shares with Prime Minister Narendra Modi is being viewed as a precursor to the BJPs ambitious plans of aggressively expanding its own base in Bihar, where it has played second fiddle to the JD(U) boss so far.
Kumar is also understood to have tactically remarked at the NDA meeting that he was in favour of “a BJP CM”, but was agreeing to take up the job again “because of the insistence” of the saffron party.
The BJP leadership, including Prime Minister Narendra Modi, had been emphatically stating that Kumar will be retained as CM even if his JD(U)s strength in were to shrink in the assembly polls.
The BJP is said to be wary of Kumar, sore over rebellion of Chirag Paswans LJP, gravitating towards the opposition Grand Alliance.
There have also been speculations that the BJP, which has 74 MLAs against only 43 of JD(U), was likely to insist on having a greater share in the council of ministers and have one of its members as the Speaker, a post which has been with the Kumars party ever since he took over a decade and a half ago.
In addition to the two aforementioned parties, the NDA in Bihar includes smaller allies Vikassheel Insaan Party (VIP) and Hindustani Awam Morcha (HAM).
HAM president Jitan Ram Manjhi, a former Chief Minister, has ruled himself out of joining the new ministry and is said to be lobbying for his son Santosh Suman who is a member of the legislative council.
The VIP is in a peculiar position as all its four MLAs are said to be BJP cadre who fought on the fledgling outfits symbol, while the two-year-old partys founding president Mukesh Sahni, a former Bollywood set designer, himself lost in the elections. (PTI)