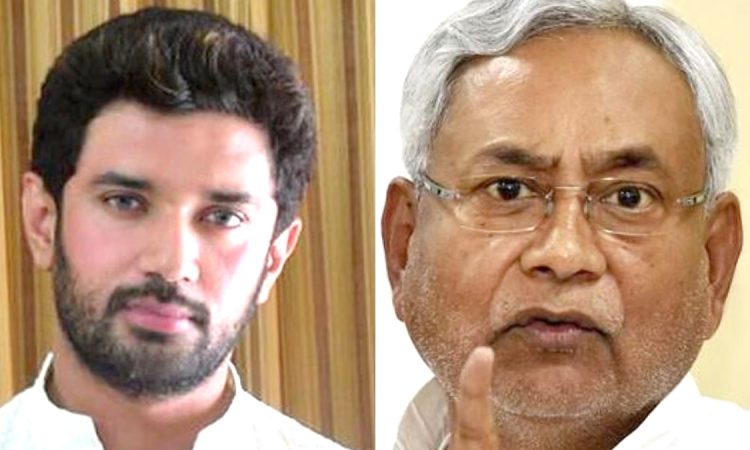 Patna, October 23: Lok Janshakti Party president Chirag Paswan on Thursday said that the Bihar Chief Minister Nitish Kumar might re-align with Lalu Prasad Yadav’s RJD which he had dumped a few years ago.
Paswan also alleged that Kumar, who heads the JD(U), “conspired” to make the BJP fight on less than 157 seats, the number it had contested in 2015, and pointed out that the Chief Minister had agreed to field his party’s candidates in only 101 constituencies when he was contesting in alliance RJD.
“In the last assembly polls, respected@NitishKumar became the Chief Minister with the blessings of respected @laluprasadrjd whom he ditched and again grabbed the chair with the blessings of the Prime Minister,” Paswan tweeted.
“May he not again rush towards @laluprasadrjd, seeking refuge, after receiving the blessings of @narendramodi”, he added.
Chirag Paswan, who took over as the party chief from his father less than a year ago, announced his decision to go solo in the Bihar assembly polls last month.
PromotedListen to the latest songs, only on JioSaavn.com
The LJP president has vowed to ensure the defeat of the JD(U), whose chief he has accused of having misbehaved with his late father and refused to give smaller alliance partners their due.
The 37-years-old LJP MP has been, however, swearing by his loyalty towards Modi and the BJP and repeatedly asserting that he would work towards formation of a new government headed by the saffron party. (PTI)