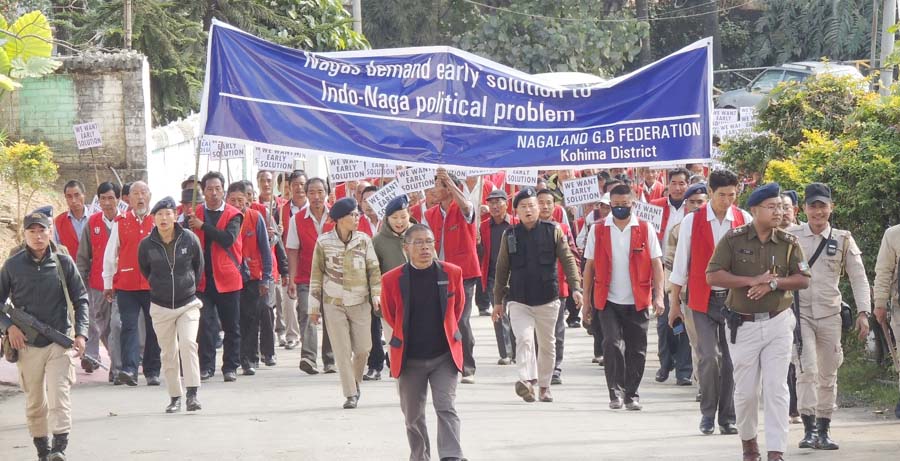 Kohima, December 12: With the ongoing political negotiations between the Government of India and Naga National Political Groups (NNPGs) not making any acceptable head way, hundreds of Goan Burahs supported by Naga civil societies Wednesday took to the streets demanding final settlement of the vexed issue.
The appeal was made through state-wide peace rally held under the aegis of Nagaland Goan Burah Federation (NGBF), a traditional and customary institution representing every village in the State.
In the State capital, hundreds of GBs converged at Indoor Stadium Kohima demanding the GoI for early settlement of Naga political issue. They held placards and banners some of which read, “We want early solution”, “Nagas demand early solution to Indo-Naga political problem,” etc.
Following the rally, the federation marched to Raj Bhavan and submitted a representation to Prime Minister, Narendra Damodardas Modi through State Governor PB Acharya.
“In the land of the Nagas, the people’s anticipation and desire for an honourable and acceptable political solution through political dialogue with Naga political groups namely, Working Committee (WC) comprising of multiple armed Naga groups and NSCN (IM) is very high,” the GB Federation stated through the memorandum.
Asserting that the Naga people’s positive expectation from Modi’s government is unmistakable, the federation stated that “it is the talk in every Naga kitchen and hearth across the length and breadth of the Naga lands”.
“We are reminded of your televised pronouncement to international audience on the cessation of hostility between GoI and Nagas, and the fresh impetus for peaceful coexistence,” the federation said, adding Union Home Minister Rajnath Singh too had, on many occasions, assured that the Indo-Naga political issue was nearing solution.
Appreciating the GoI’s wisdom in appointing R.N. Ravi, Deputy National Security Advisor as an interlocutor in the Indo-Naga political negotiations, it said having signed the Framework Agreement with NSCN-IM on August 3, 2015, the Naga peoples hope and expectation for political solution became much more vocal and practical when an “Agreed Position” or “Preamble” was signed on November 17, 2017 between the interlocutor RN Ravi and the Working Committee of the six Naga political groups.
“For once, there emerged a real possibility of the long drawn political conflict between GoI and Nagas ending with an honourable and acceptable solution,” the federation said.
Reminding the PM that it is December 2018, and festive atmosphere is visible, the federation said “as our people await Christmas and New Year, would you and your esteemed colleagues not care to take a decisive step that, you have very often promised to the Naga people?”
Maintaining that PM Modi is at an epoch making juncture of both Indian and Naga history, the federation stated the ongoing political negotiations have touched all important matters and that both entities have in principle agreed to work out the detail for peaceful coexistence considering contemporary political reality.
Pointing that “it is reported that only symbolic issue require further understanding”, the federation expressed the believe that “now is the time for GoI, with you (Modi) at the helm, to take the final step”.
“Nagas have had bitter past experiences and it would not be in the interest of GoI to leave the issue unattended beyond your trusted leadership,” the federation said.
Observing that the progress of negotiations seems to have slowed down “without obvious major hitch”, the federation opined that the “seeming hiatus” is indeed a matter of serious concern.
The NGBF urged the PM to help create an honourable and acceptable future for the Naga people, “allowing us to prosper through peaceful coexistence, defending the democratic principles that we all strongly believe in.”
NGBF president Shaleem Konyak, general secretary Shikuto Zalipu and Kohima District GB Association president Vineipra Pienyü appended the memorandum.
Phek:
Phek District GBs Association held a peace rally at Phek headquarters today in DC’s office Junction with regard to Indo-Naga political issue. A short meeting took place where the people voiced out the need to have anticipation and desire to hold acceptable political solution for the Naga people.
The rally also proceeded to DC chamber and met him where he assured them to do the needful.
Tuensang:
Along with the rest of the GBs Association Nagaland, the Tuensang District GBs Association observed a silent procession with the slogan of “we want solution” on the political issues between Government of India (GOI) and the Nagas held in the Clock Tower at Tuensang Town today.
Tuensang District GBs Association and its office bearers submitted a memorandum to the Deputy Commissioner (DC) Tuensang, L. Jamithung Lotha looking for epoch – making juncture between GOI and representing by R.N. Raving and Naga Leaders through the ongoing political Negotiation.
The memorandum was handed by the Association President and the Secretary Hongsai and Lakiumong. They also lamented over the slow process of the negotiations with the any major reasons and they also urged the GOI for peaceful and rapid political solution towards the Nagas through its leaders.
Dimapur:
In Dimapur, the GBs submitted a memorandum to Deputy Commissioner Dimapur on Wednesday morning.
(Page News Service)

Identify private hospitals to treat COVID-19 patients for free or at nominal cost: SC to Centre