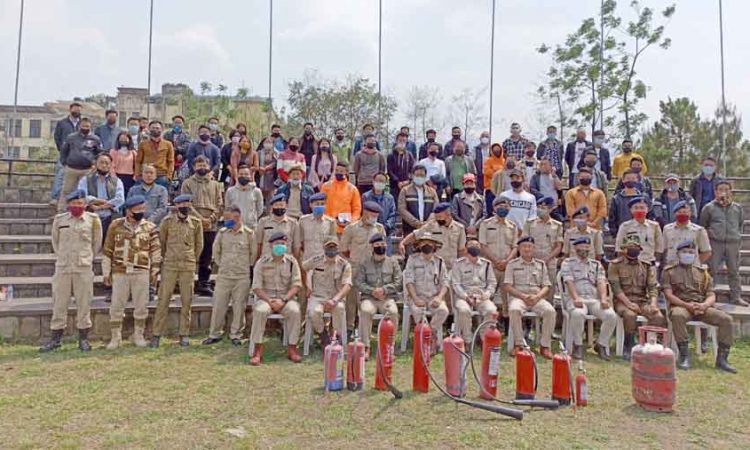 Giving a brief account of fire incidents in Kohima, SI and OC of North Fire Station, Neiketou Sopfii said that fire stations in Kohima received as many as 44 fire calls, with 25 of them detected in the month of March.
The programme which was attended by 63 participants from Governmental Departments and Colony representatives were given lectures and demonstrations on how to operate a fire extinguisher, how to respond to LPG cylinder fire outbreak and basic knowledge on how to go about search & rescue during fire outbreaks.
Sharing an experience of the awareness programme, Kepingtad Newmai said that the awareness programme was very useful for him.
He said that the demonstration on how to respond to fire incidents due to LPG cylinder leakage was one of his favourite because everybody uses it daily. Newmai further shared that with the knowledge and certain tricks and tips on how to handle fire situations by the NFES on Saturday, he now has some directions and a guide on how to respond to fire situations.
Giving a demonstration on handling fire extinguishers, ASI Menose Zashumo elaborated and demonstrated the usage of different fire extinguishers to the gathering.
He said that there is a conception in the mind of the public that any type of fire extinguishers will be able to douse any type of fire is false. In this regard, he further informed that fire extinguishers can be classified as Dry Chemical Powder (DCP), Carbon-dioxide fire extinguishers, foam extinguishers and water type extinguishers.
Stating that LPG cylinder and electricity are the main causes of fire in Nagaland, ASI Dzesengutuo Keyho also led a demonstration on how to handle fire originating from gas leakage. Keyho informed the participants of the awareness programme on some of the ways to prevent gas fire is to keep the cylinder in a secure and upright position and avoid keeping other electrical appliances near the gas cylinder. Pointing out the most of the fire incidents due to leakage of gas from LPG cylinders, Keyho also encouraged that gathering to take preventive measures as it was the best way to avoid any accident.

He also said that while the explosion from a gas cylinder is much to be feared, there is no reason to panic if people know the right technique to respond to a fire situation caused from the leakage of gas.
Keyho also shared some useful tips on how to discern the quality and validity of a gas cylinder by teaching the participants on how to read the certain letters and numbers found on every cylinder.
SI Inaka also led a team of fire fighters in demonstration how a search & rescue operation is conducted in emergencies and SI Thepfiikranyii brief the participants on the do’s and don’ts in fire situation.
The participants were also informed on the basic functions of a fire tender engine, and were given the opportunity to operate the engine. (Page News Service)