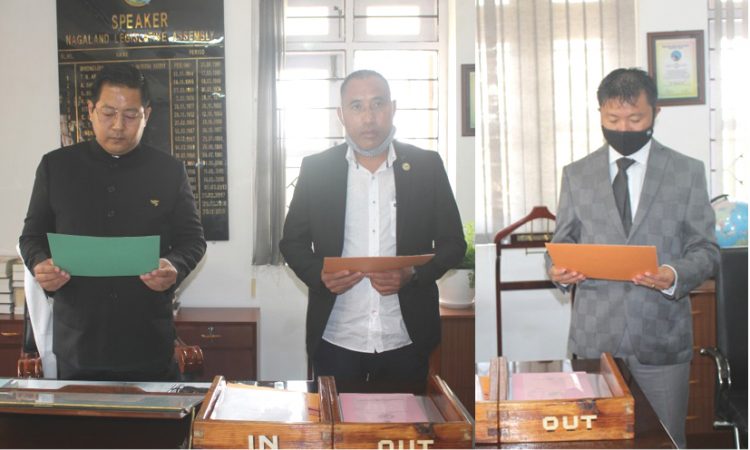 By-election to the two constituencies was held on November 3 while the result was declared on November 10.
Medo Yhokha took oath in presence of State Agriculture Minister, G Kaito Aye; Planning Minister, Neiba Kronu; Advisor Neikiesalie Nicky Kire and some party leaders and supporters from his constituency.
T Yangseo Sangtam took oath in presence of his wife, Dr Thritingla and supporters from his constituency.
Both the newly elected members signed the Roll of Members of the Assembly in presence of the Commissioner & Secretary Dr PJ Antony.
In the 60-member House, the ruling Nationalist Democratic Progressive Party (NDPP) has 20 MLAs while its ally BJP has 12 members and also is supported by two Independents. Opposition Naga People’s Front (NPF) with 25 members is the single largest political party.
Meanwhile, interacting with media persons after the swearing in ceremony, newly elected Independent MLA Sangtam said he would extend support to the ruling People’s Democratic Alliance (PDA) of Nagaland.
However, the PDA partners, both NDPP and BJP during the election campaign had announced not to accept any independent winners into the ruling front as they are comfortable with the present strength.
The 51-Noksen Assembly seat is vacant following the demise of sitting MLA, Minister C M Chang in October. (Page News Service)