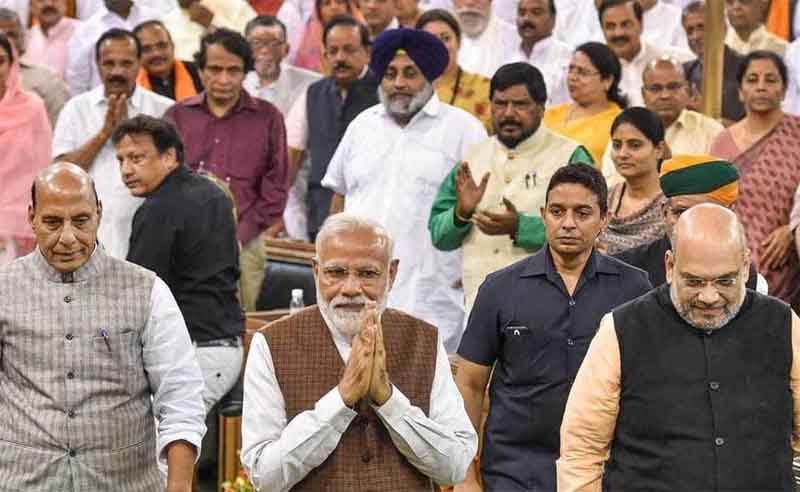 NEW DELHI, May 26: BJP allies JD(U) and AIADMK are likely to be part of the new government while it will also reflect the saffron party’s inroads into states like West Bengal and Telangana, sources said on Sunday.
A JD(U) leader said the Bihar party expects at least one Cabinet berth in the government which will be sworn in on May 30. The party may also get one more berth in the council of ministers.
The BJP put up its best ever show in West Bengal and Telangana in these elections, winning 18 (from two in 2014) and 4 seats (from one in 2014) respectively in the two states. This may result in the party giving a greater representation to these states in the government.
The Rashtrapati Bhavan said on Sunday that Narendra Modi will be sworn in as Prime Minister on May 30 for his second term.
Though there has been no official word on likely faces in the new government, many leaders are of the view that most key members of the previous dispensation will be retained.
There has been speculation that Arun Jaitley, who held the finance portfolio in the previous government, may opt out due to health reasons but people close to him have insisted that he has been doing well after undergoing treatment.
The government on Sunday stepped in to insist that reports regarding his heath condition are false and baseless.
“Reports in a section of media regarding Union Minister Shri Arun Jaitley’s health condition are false and baseless. Media is advised to stay clear of rumour mongering,” principal spokesperson Sitanshu Kar tweeted.
Rajya Sabha MP Swapan Dasupta, who is associated with the BJP, said Jaitley is off all medication now and is recovering his strength. He is still meeting officials, Dasgupta said.
“Questions about Arun Jaitley health understandable. He is recovering from a bout of heavy medication. But he is still in terrific form and his wit is firmly intact. Needs a little rest to get back his strength. All our good wishes,” Dasgupa tweeted.
A number of senior faces from the outgoing cabinet including Rajnath Singh, Nitin Gadkari, Nirmala Sitharaman, Ravi Shankar Prasad, Piyush Goyal, Narendra Singh Tomar and Prakash Javadekar are expected to figure in the new Cabinet.
Speculation has been rife that BJP president Amit Shah, who won the Lok Sabha election from Gandhinagar with a massive margin, may also join the government. Shah has refrained from commenting on the matter.
Another BJP ally LJP president Ram Vilas Paswan, sources said, has pushed for induction of his MP-son Chirag Paswan in the government. His party LJP won six seats in the polls. Ram Vilas Paswan, a veteran parliamentarian, was a Cabinet minister in the last government.
Though the AIADMK, which was also not part of the previous government, has won only one seat, it may be given a ministerial berth as it is in power in Tamil Nadu and a key dravidian ally of the BJP. (PTI)