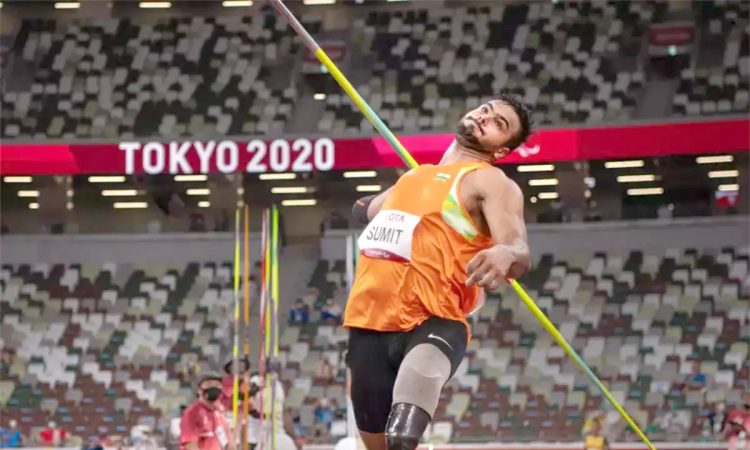 NEW DELHI, September 2: Tokyo Paralympics gold medallist Sumit Antil on Thursday clarified that he never said that he wants to participate in the Paris 2024 Olympics as his focus remains on touching the 80m mark.

Earlier this week, Antil’s remarks of wanting to participate in the Paris Olympics had gone viral. However, now the javelin thrower has opened up on his statement, clarifying that he has been widely misquoted.
“I have read this statement at many places, I have not said anything like this. This is a wrong statement that has been attributed to me, this comes off as overconfidence. I had said that I would try to touch the 80m mark, in my eyes, it is wrong that such a statement is being attributed to me,” said Antil in an audio clip shared by the Paralympic Committee of India (PCI).
India’s Sumit Antil very comprehensively won gold in the men’s javelin throw (Sport Class F64) at National Stadium in Tokyo. Sumit dominated the show from the word go as he improved the World Record three times in the final. He threw a monstrous throw of 68.55m in his fifth attempt to climb on the top of the podium.
After winning a gold medal at the ongoing Tokyo Paralympics, javelin thrower Sumit Antil on Monday said that he is satisfied with his performance but wanted to touch the 70m mark.
“I wanted to touch the 70m mark, but I am very happy with my performance. In one competition, I was able to break the World Record thrice. And I was also able to win the gold medal, I cannot express how I am feeling right now, I am just numb, to be honest,” Antil told ANI.

Sumit who went first in the field gave an almost uphill task to all contenders as he started the final by breaking his own World Record with a throw of 66.95m. The previous World Record was 62.88m, which Sumit improved by almost 4 meters in his very first attempt. (Agencies)