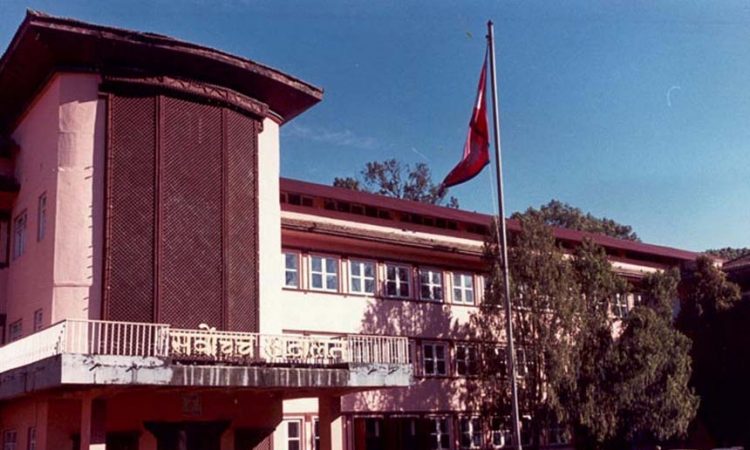 Kathmandu, June 9: Nepal’s Supreme Court on Wednesday issued a show cause notice to the Office of the President, the Office of the Prime Minister and the Council of Ministers on the dissolution of the House of Representatives and sought a reply within 15 days.

President Bidya Devi Bhandari, at the recommendation of Prime Minister K P Sharma Oli, had dissolved the House for the second time in five months on May 22 and announced snap elections on November 12 and November 19.
Prime Minister Oli is heading a minority government after losing a trust vote in the House.
The five member constitutional bench, headed by Chief Justice Cholendra Shumsher Rana, has sought clarification from the defendants, according to sources in the Supreme Court.
The proceedings of the politically significant case, which had been disrupted since Sunday, finally resumed on Wednesday.
It has been learnt that regular hearings on the case will resume from June 23 after the completion of 15-day deadline provided by the court to the defendants to submit their clarification.
A report in myRepublica.com said that the apex court has decided to seek the help of two senior advocates each from Nepal Bar Association and Supreme Court Bar Association as amicus curiae to decide the case related to the dissolution of the 275-member House of Representatives.
The chief justice formed a five-member Constitutional Bench on Sunday on the basis of seniority to conduct a hearing on dissolution of the House.
As many as 30 writ petitions, including by the Opposition alliance, have been filed in the Supreme Court against the dissolution of the House, which they said was “unconstitutional”.
The hearing on the writs related to House dissolution has been obstructed multiple times following the petitioners’ and government lawyers’ cycle of objections over the composition of justices in the Constitutional Bench claiming conflict of interest.

Nepal plunged into a political crisis on December 20 last year after President Bhandari dissolved the House and announced fresh elections on April 30 and May 10 at the recommendation of Prime Minister Oli, amidst a tussle for power within the ruling Nepal Communist Party (NCP).
In February, the apex court reinstated the dissolved House of Representatives, in a setback to embattled Prime Minister Oli who was preparing for snap polls.
Oli repeatedly defended his move to dissolve the House of Representatives, saying some leaders of his party were attempting to form a “parallel government”. (PTI)