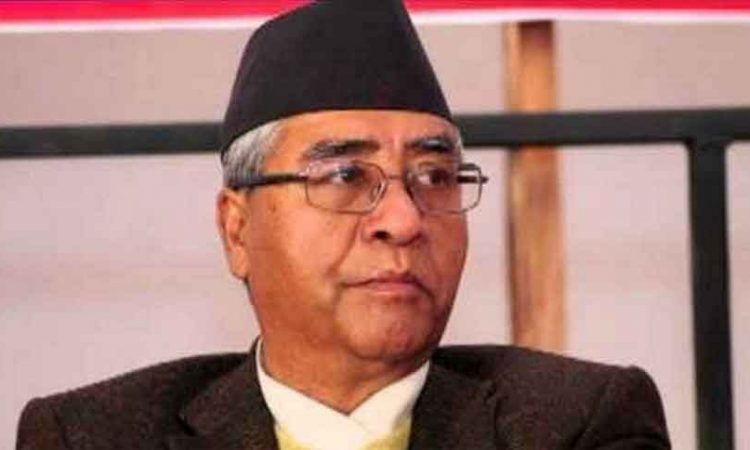 Kathmandu, May 21: Nepal’s Opposition parties on Friday decided to stake a claim for the formation of a new government under former prime minister Sher Bahadur Deuba’s leadership, in a fresh twist to the protracted political crisis bedeviling the Himalayan nation.

The Opposition’s decision came after embattled Prime Minister K P Sharma Oli reportedly expressed unwillingness to undergo another floor test to prove his government’s majority in the House of Representatives.
Leaders of the Opposition alliance have reached the official residence of President Bidya Devi Bhandari to stake a claim to form the next government.
The alliance including the Nepali Congress (NC), CPN (Maoist Center), the Upendra Yadav-faction of Janata Samajbadi Party (JSP) and the ruling CPN-UML’s Madhav Nepal faction has claimed to have the support of 149 lawmakers of the House of Representatives (HoR), said Nepali Congress senior leader Prakash Man Singh.
The number includes 61 MPs of Nepali Congress, 48 of Maoist Center, 13 of JSP and 27 of UML, My Republica website reported. The leaders from the Opposition alliance left for the President’s official residence, Shital Niwas, to submit the signatures of 149 lawmakers recommending Sher Bahadur Deuba’s appointment as the prime minister.
Deuba, 74, is the president of the Nepali Congress and served as the prime minister of Nepal on four different occasions; first from 1995 to 1997, then from 2001 to 2002, again from 2004 to 2005, and from 2017 to 2018.
The veteran politician currently serves as the Leader of the Opposition since the 2017 general elections. He is also the current president of the Nepali Congress, having been elected to the position in 2016.
President Bhandari had given the parties a deadline until 5:00 pm, Friday, to present their claim.
On Thursday, the government had recommended the president to initiate the formation of a new government pursuant to Article 76 (5) of the Constitution of Nepal as Prime Minister Oli was not ‘in the mood’ to withstand another floor test.
The prime minister, after his reappointment on May 10, was supposed to gather the House of Representatives’ confidence within 30 days.
It was feared that if the new government could not be formed as per Article 76 (5), Oli would invoke Article 76 (7) and recommend dissolution of the House of Representatives yet again.
Oli, who is the Chairman of the Communist Party of Nepal-Unified Marxist-Leninist (CPN-UML), was sworn in as Nepal’s Prime Minister as per Article 76 (3) of the Constitution on May 14, four days after he lost a crucial vote of confidence in Parliament.
The CPN-UML is the largest party with 121 seats in the 275-member House of Representatives. At present 136 votes are needed to form a majority government. He was required to seek a vote of confidence in the House of Representatives within 30 days of his appointment to the post.
Earlier on Thursday, the president’s office stated that the government had forwarded a request to invoke Article 76 (5) as Prime Minister Oli, it has been learnt, is in no mood to undergo another parliamentary floor test as there is no prospect of an otherwise result given the complex internal dynamics within parties represented in the federal parliament.
There have been differences between Oli and senior leader of the rival faction of the party Madhav Kumar Nepal since the vote. In a temporary relief for Oli, the Supreme Court on Tuesday refused to issue an interim order on the writ petitions against his controversial oath-taking and reappointment of the seven ministers who are not lawmakers.

Four writ petitions were filed in the Supreme Court of Nepal on Monday demanding that Oli be sworn in again as he disgraced the office of the President by refusing to repeat all the words she recited during the oath-taking ceremony.
Nepal plunged into a political crisis on December 20 last year after President Bhandari dissolved the House and announced fresh elections on April 30 and May 10 at the recommendation of Prime Minister Oli, amidst a tussle for power within the ruling Nepal Communist Party (NCP).
Oli’s move to dissolve the House sparked protests from a large section of the NCP led by his rival ‘Prachanda’. In February, the apex court reinstated the dissolved House, in a setback to Oli who was preparing for snap polls.(PTI)