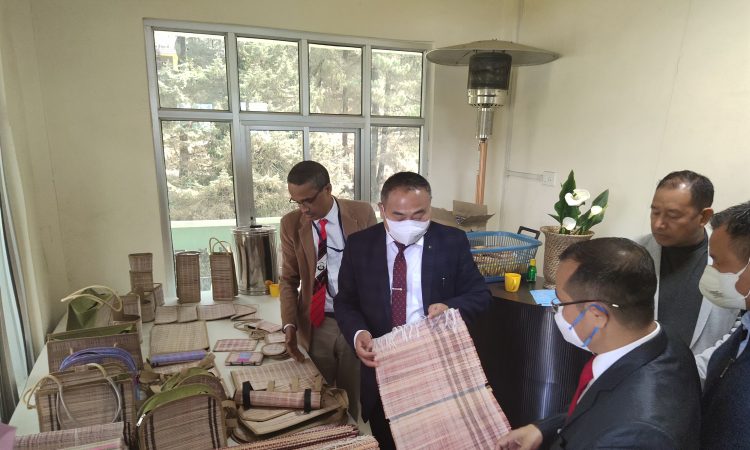 Kohima, March 19: Nagaland Minister for Planning and Coordination, Neiba Kronu today stressed on the need for the Naga people to involve in production of low volume but high value crops, including coffee, honey, black pepper and cardamom.

He made the emphasis while speaking as the special guest of the valedictory function of a nine day long Skill Development Training on Cardamom Fibre Craft conducted by North Eastern Development Finance Corporation Ltd (NEDFi) as as part of its Corporate Social Responsibility (CSR) in association with Spices Board of India and Phek Organic Large Cardamom Producer Company Limited (POLCPC Ltd) in collaboration with Chakhesang Women Welfare Society (CWWS) at Pfutsero under Phek district today.
Altogether 25 women trainees from cardamom growing villages of Phek district were trained by expert trainers on making yoga mat, diary, laptop bag, file cover, purse, side bags, marketing bags, tea coasters, table mat, pen stand, storage box etc during the nine days long training which started on March 11.
The minister was appreciative of the NEDFi and Spices Board for coming forward to help the cardamom farmers and hoped that it would boost cardamom activity in Phek district.
Liking the new thing happening in cardamom sector in the state, Kronu appealed to NEDFi and Spices Board not to be hesitant to invest in agro based industry in the state, assuring that it will not be a failure.
He also requested the Spices Board of India to promote black pepper since varieties of black pepper is grown in the state.
Kronu also requested NEDFi to focus on developing Banana fibre as well.
Further, the minister urged the farmers not to be disheartened with the prices as market rate will fluctuate. “If the production/supply is consistent, then it will not fail the farmers,” he added.
Referring to Cardamom Fibre Craft, Deputy General Manager of NEDFi, Guwahati Ashim Kumar Das said “This is a new product. We have to cater to the market.”
Stressing on the need to improve the technology and take cardamom fibre product forward, Das assured that NEDFi would definitely work together with the cardamom growers of the state.
Deputy Director of Spices Board of India, Guwahati, Dharmendra Das assured that the Board will support and promote marketing of cardamom both to the national and international level.
“We will buy your products,” Das assured the cardamom growers adding that a big challenge ahead is “We have to see the marketing possibilities.”
Senior scientist & head I/C Krishi Vighyan Kendra Porba, Dr. T. Esther Longkumer said that Phek district is suitable for growing of cardamom and encouraged the farmers to take keen interest in it. Nagaland is the third highest producer of large cardamom after Kerala and Sikkim, she said.

As per 2019 record, she informed that cardamom cultivation in Phek district has spread over 277 ha with production of 630 MT so far.
CEO of Phek Organic Large Cardamom Producer Company Limited (POLCP Ltd), Vilhou Wetsah said that presently, POLCP Ltd has 500 share subscribers who are primary producers of cardamom.
During 2018-19, it has marketed 20 MT of cardamom, 50 MT during 2019-20 and it anticipates to market 60 MT during 2020-21. We have organic certificate for large cardamoms, he said.
The function was chaired by Nezelu Nyekha, executive director CWWS.
Cardamom fibre, a new material for craft sector
According to NEDFi, natural fibre offers an opportunity to create sustainable livelihood in rural areas of the north eastern region of India, especially in the craft sector.
NEDFi Craft Incubation Centre (NCIC) at Khetri, Assam has been working on a variety of natural fibres.
As water hyacinth is not available in the hill states of the region, NEDFi Craft Incubation Centre was working on identification of a new raw material, appropriate for these states. Identification of a new raw material in the natural fibre sector generates inquisitiveness among craft lovers and therefore has good market potential too.
This led the team to work on large cardamom which is grown in the hill states, and development of prototypes for bags, basketry and mats.
Large Cardamom is a spice cultivated in sub-Himalayan regions. It is a perennial cash crop, grown in the states of Sikkim, Arunachal Pradesh and Nagaland.
As part of intercultural operation, the matured stems are removed annually to pave way for the new shoots. Similarly, the diseased plants are also removed from the plantation areas.
Since the plants may grow upto a height of 2.8 m, depending on its variety, such discarded stems can be processed for its use in craft activities.
The stiffness of cardamom fibre is more, when compared to softer materials like water hyacinth. However, it has its own advantage for its toughness and rigidity.
For weaving of mats, the stems are died and thereafter sticks of desired size are prepared which are then woven on looms with cotton yarn.
The cotton yarn is used on the warp of the loom while cardamom fibre is woven on the weft.

In terms of thickness and appearance they are comparable with bamboo table mats, however the natural shades of pink make them more attractive.
The technology was initially introduced in a training programme organized at NEDFi Craft Incubation Centre, Khetri where participants from Arunachal Pradesh, Nagaland and Sikkim learned the craft.
Spices Board of India has requested NEDFi to include more villages in the state of Arunachal Pradesh and Nagaland as it will help to generate additional income to the cardamom growers of the states.
(Page News Service)