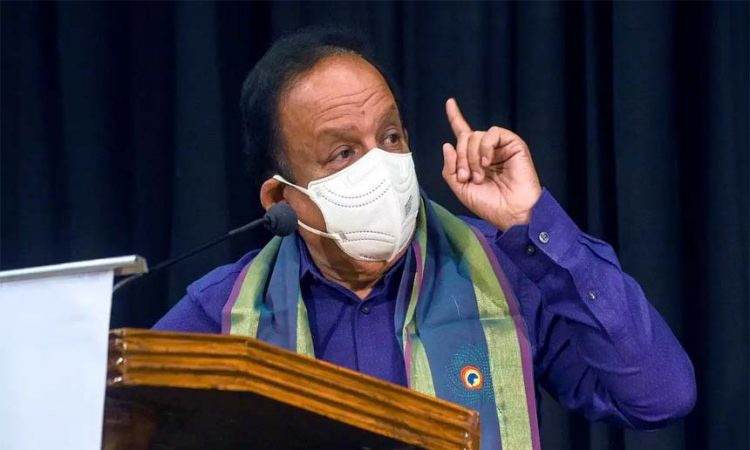 New Delhi, April 12: The whole world is grappling with the devastating effects of the COVID-19 pandemic and it is necessary to be prepared to deal with emerging and re-emerging infections in the future, Union Health Minister Harsh Vardhan said on Monday.

He made the remarks while chairing the Indian Council of Medical Research’s international symposium ‘One Health in India: Research informing bio-safety, preparedness and response’.
Vardhan through video conference also launched a special issue of the council’s Indian Journal of Medical Research, which discusses the ‘One Health approach’, the health ministry said in a statement.
“The whole world is grappling with the devastating effects of COVID-19. It is the need of the hour to brainstorm and find out ways for future emergency preparedness against emerging and re-emerging infections,” the minister said.
“With increased interaction between humans and animals domestic and wild, and influenced by climate change, human health can no longer be seen in isolation. Our present COVID-19 pandemic is more than a reminder of this fact,” he was quoted as saying in the statement.
Vardhan expressed hope that the steps envisaged would help avert the next pandemic and reminded the audience that it was the unwavering political commitment of India’s leadership led by Prime Minister Narendra Modi which ensured that India not only withstood the COVID crisis but also witnessed the most dynamic economic recovery worldwide, it said.
The commencement of the constitution of a high-level steering committee for eco-health initiatives in India was also announced during the event, the statement said.
This committee will have its secretariat at the ICMR, and will be supported by the upcoming National Institute of One Health which is planned to be set-up in Nagpur, it said.
Recognising the fact that the health of a population is closely connected to the health of animals and the shared environment, Vardhan explained how this phenomenon increases zoonoses and how diseases can pass between animals and people.
More people are today in closer and regular contact with wild and domestic animals, both as livestock and pets. This is both a result of human population growth as well as the expansion of human habitation into new geographic areas,” he said.
“There is a significant increase in human-animal interaction at the domestic level, particularly through the adoption of animals as pets, including otherwise non-domesticated species. Exotic food fetishes in many parts of the world and medicinal beliefs are also driving increased human entry into the animal space in the wild,” Vardhan said.
The movement of people, animals, and animal products has increased at the international level. As a result, diseases can spread quickly across borders and around the globe, unintentionally or otherwise, the minister said, according to the statement.

“These changes have led to the spread of existing or known (endemic) and new or emerging zoonotic diseases. More than half of all infections that people can get can be spread by animals. Each year around the world, it is estimated that zoonoses (diseases shared between people and animals) cause 2.5 billion cases of sickness and 2.7 million deaths,” he was quoted as saying in the statement.
Vardhan noted that the symposium had experts cutting across disciplines and global thought leaders.
This symposium is a start point for a broad-ranging, multi-stakeholder discussion and collaboration to secure better health for all on this beautiful planet we call home , he added. (PTI)