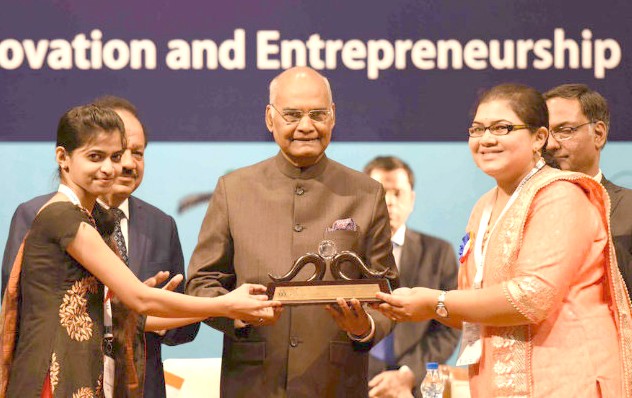 New Delhi, March 19: President Ram Nath Kovind on Monday said innovations by themselves were not enough and there was a need to develop an ecosystem for their conversion into enterprises.
The vision of a newer and better India calls for meeting certain developmental milestones, some of these as early as 2022, the year the country commemorates 75th anniversary of Independence, he said at the inauguration of the Festival of Innovation and Entrepreneurship (FINE) 2018.
The president also presented the Gandhian Young Technological Innovation (GYTI) Awards on the occasion.
He called for revitalising every link in the innovation value chain.
“We need schools where children tinker rather than memorise and mug. We need work cultures where young talent looks up and questions – rather than looks down and nods. And, of course, we need the government to provide a facilitative environment,” Kovind said.
An important initiative of the government is to encourage young people to innovate and address unmet needs of the society, he said.
“We have to promote cutting-edge technologies alongside grassroots innovations so that a pipeline for future applications is generated,” he said.
The president said climate change and fluctuations as well as burden of communicable and non-communicable diseases are adding to the complexity of the human habitat. The need for technology-driven solutions cannot be ignored.
“I am conscious that innovations by themselves are not enough. We must also build an ecosystem for converting innovations into enterprises. This requires support for start-ups and for incubating young innovators,” he said.
Appreciating the festival, Kovind said it is remarkable that the number of exhibits of grassroots innovations and technologies has almost doubled this year which indicates innovation opportunities in local communities across the country.
He also pitched for encouraging cultivation of medicinal plants in close cooperation with industry to conserve bio-diversity and reduce pressure on forests.
The festival is being organised by Rashtrapati Bhavan, in association with the Centre’s Department of Science and Technology and the National Innovation Foundation, from March 19 to 23, a statement said.
There are around 250 innovators who are displaying their exhibits at the Rashtrapati Bhavan here.
Hema Pradhan from West Sikkim is among the grassroots innovators who is displaying her exhibit in the festival, the statement.
She gave the idea of a spring or shock absorber supported stretcher so that the shocks, while attendants are carrying a patient or keeping the stretcher down, could be minimised.
Aparna Chandrasekar from Chennai has given an idea of a watch with an in-built chilly spray, which gets automatically sprayed on the person who may be bullying the wearer, it said.
In such a situation generally the heartbeat and blood circulation increases, which triggers the sensor in the watch to release the spray, the statement said.
The president presented the GYTI award to Bikash Ranjan Tiwari and Mohd Tabish Noori (IIT Kharagpur) for designing a novel low-cost polyvinyl alcohol-nafion-borosilicate membrane separator for microbial fuel cell treating distillery wastewater, it said.
Avinash Prabhune from Indian Institute of Technology Mumbai was awarded for developing a window solar cooker.
Abhik Saha from Assam’s Don Bosco High School developed a social search engine – Origgon for which he received the GYTI award.
Ekdeep Singh Lubana (IIT Roorkee), Pallabi Das and Kasturi Sarmah (Tezpur University), Ravi Prakash (National Dairy Research Institute, Karnal), Neeta Wagle and Priti Prabhakar Yewale (Dr D Y Patil Vidyapeeth), Trivikram A (IIT Bombay) and Divya Beri, Shweta Chaubey and Aparna Sudhakar (IISc,Bangalore) were among the other recipients, the statement added. (PTI)