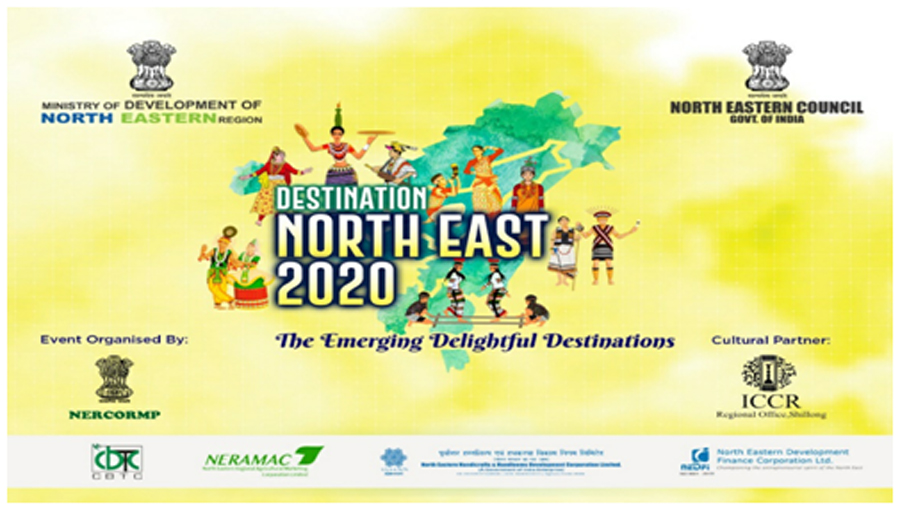 Dimapur, September 21: Union Minister of State (Independent Charge), Development of North Eastern Region (DoNER), Dr Jitendra Singh on Monday unveiled the logo and song for festival “Destination North East-2020” (The Emerging Delightful Destinations) through a video conference.
The 4-day event will be formally inaugurated by Union Minister for Home Affairs Amit Shah on September 27, with Dr Jitendra Singh as guest of honour. The chief guest for the closing ceremony on September 30 will be Kiren Rijiju, Union Minister of Youth Affairs & Sports, while Rameshwar Teli, Union Minister of State for Food Processing Industries will be the guest of honour, informed a PIB press release.
Speaking on the occasion, Dr Jitendra Singh said that North-Eastern Region will be one of the favourite tourist and business destinations of India post COVID-19 and will be an important engine for Prime Minister Narendra Modi’s clarion call of Atmanirbhar Bharat by focusing on “Vocal for Local”. He said the event “Destination North East 2020” is also an effort to make everyone explore local destinations rather than going anywhere abroad.
The Minister said that people should take a pledge to “Visit Local, Travel Local and Explore Local” thus giving a boost to the local tourism and hospitality industry. Moreover, he added that by remaining Corona free mostly, North East offers a very safe and attractive tourist destination in the entire world.
Dr Jitendra Singh said that North East offers a lot to rest of India to learn from its culture, cuisines, entrepreneurship skills, scenic attributes and a society which is highly disciplined, literate and forward looking. He said the region has a very rich business tradition in the areas of bamboo, handicrafts, textiles and handloom.
The Union Minister said that the Festival Destination North East has been travelling across the country since last couple of years, from Varanasi in 2019 to the Lawns of India Gate in New Delhi or in Chandigarh before that and now it will be virtually reaching everyone’s homes this year. He said the festival is not just about tourism, but it’s an invitation to the organizations and especially to the young entrepreneurs who would like to avail the advantage of unexplored potentials of the region.
Dr Jitendra Singh said that the Narendra Modi Government has left no stone unturned when it comes to the development of North Eastern Region. Be it railways, airways or road connectivity, the transformation in the last six years is unprecedented. He said that in the last six years, not only developmental gaps were bridged successfully, but North- Eastern Region has also gained psychological confidence. (Page News Service)