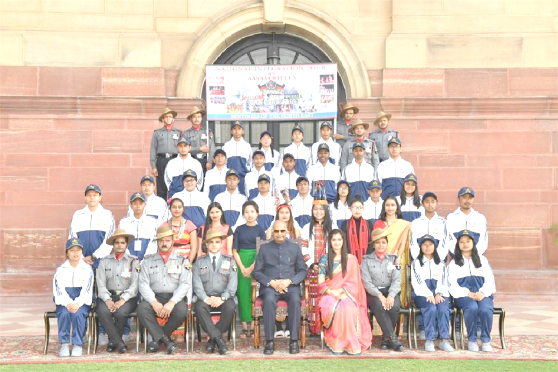 Dimapur, December 6: A National Integration Tour team comprising of 26 students and 7 teachers from all 7 North Eastern states of India interacted with the President of India Ramnath Kovind at Rashtrapati Bhawan, New Delhi today.
During the interaction, the President inquired about the well being and challenges faced by the youth of the region and encouraged them to work hard and contribute towards the development and elation of the region.
The students are part of the National Integration Tour which is underway from December 1 to 11 and it is organized by Aizawl Battalion of Assam Rifles under the aegis of Directorate General Assam Rifles.
The tour team also interacted with Union Minister Kiren Rijiju and Lt Gen Asit Mistry, GOC, Delhi Area as part of the tour and visited many places of historical importance in the capital to include Red Fort, & Akshardham Temple and Indian Heights School in New Delhi.
Events like meeting with Vice Chief of Army Staff, visit to Rajputana Rifles Centre and visit to Agra are also planned for the students in days to come as part of the tour. (Page News Service)