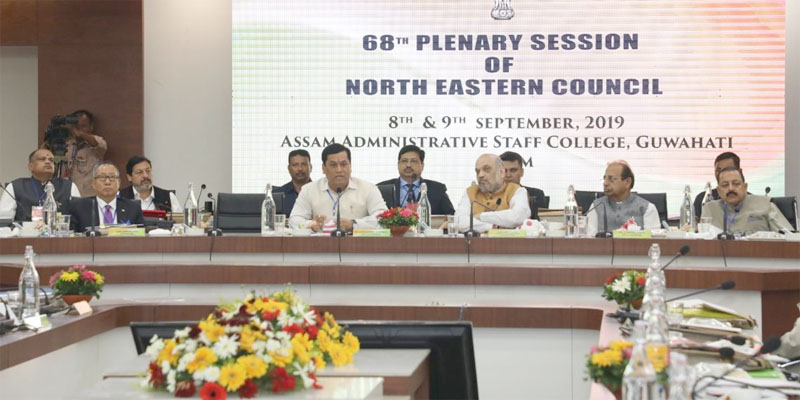 GUWAHATI, SEPTEMBER 10: Unhappy at the functioning of the North Eastern Council, the Northeastern states have sought restoration of the 6 sectors withdrawn from the institution in 2017. The Central Government had withdrawn 6 sectors – school education, primary health, sports, water supply, power and roads – by a Cabinet decision in March, 2017.
During the 2-day plenary of the NEC which concluded yesterday, Chief Secretaries, Chief Ministers and Governors from the NE states said these sectors should be restored with the institution or else “the objective of the Council to bring development to the doorstep of the people of the region would be defeated,” an official source told The Assam Tribune.
Home Secretary Ajay Kumar Bhalla suggested that as the working season in the Northeast is limited, the funds allocated for the region should not lapse for at least 3 years. “If this is not done, the purpose of the funding will not be achieved,” he was quoted as saying at the plenary by a source.
All the Chief Ministers, Governors and Chief Secretaries sought enhancement of the funds allocated to NEC and giving a free hand to the institution to decide and implement projects in consultation with the State Governments.
Senior officials from the states and key Ministries of the Government of India were also present. From the Central Government, presentations were made by the Ministries of Civil Aviation, Telecommunications, Jal Shakti, Railways, Health & Family Welfare, Power, Road Transport and Highways, Agriculture Cooperation and Farmers Welfare, Tourism, External Affairs, School Education & Literacy and Food Processing highlighting recent efforts made by the Government in the NE region. Some of the key areas in which initiatives have been taken are up-gradation of airports, increasing air connectivity of Northeast region with South-East Asian countries, strengthening broadband network and mobile connectivity especially in the uncovered villages in areas along the international border.
There were deliberations on the progress of ongoing projects of the NEC, outlays by Central Ministries in the North Eastern Region and plans for the period beyond March 2020 when the Fourteenth Finance Commission era comes to an end. They also gave suggestions on increasing the scope of the Council’s interventions in the region and improving the funds flow to the states.
The decisions and recommendations of the NEC Plenary session will be sent to various Ministries and Departments of the Central and state Governments for taking appropriate action.
(Courtesy: AT)