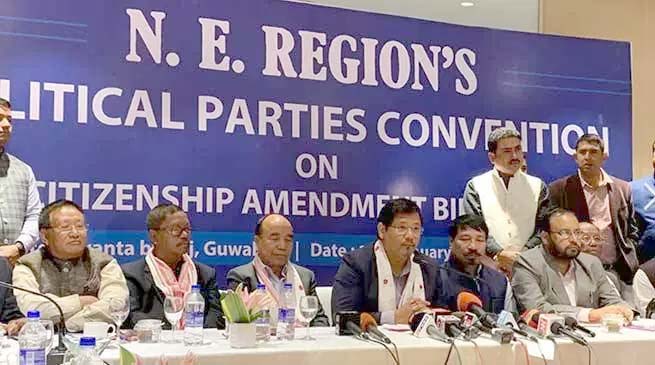 Guwahati, January 29: Ten political parties of the Northeast, most of which are members of the BJP-led North East Democratic Alliance (NEDA), along with the saffron party’s key ally in Bihar, the JD(U), on Tuesday unanimously decided to jointly oppose the Citizenship (Amendment) Bill.
At a meeting of the parties, it was also decided that a delegation comprising representatives of all the outfits would meet President Ram Nath Kovind and Prime Minister Narendra Modi to apprise them of their opposition to the bill that sought to provide Indian citizenship to those Hindus, Sikhs, Buddhists, Jains, Parsees and Christians, who fled religious persecution in Bangladesh, Pakistan and Afghanistan and entered India before December 31, 2014, after six years of residence in the country.
Meghalaya Chief Minister Conrad K Sangma, on whose initiative the meeting was called, and his Mizoram counterpart Zoramthanga also attended the meeting.
The Asom Gana Parishad (AGP), which has pulled out of the Sarbananda Sonowal-led BJP government in Assam over the issue, was also associated with the convening of the meeting.
The 10 political parties that participated in the meeting from across the north-east were — the Mizo National Front (MNF), the United Democratic Party (UDP), the AGP, the Naga People’s Front (NPF), the National People’s Party (NPP), the National Democratic Progressive Party (NDPP), the Hill State People’s Democratic Party (HSPDP), the People’s Democratic Front (PDF), the Indigenous People’s Front of Tripura (IPFT) and the Khnam.
The Janata Dal (United) was represented at the meeting by its Northeast in-charge, NSN Lotha.
“The meeting was a natural process, considering the opposition of the Northeast states to the bill and it was not politically motivated,” Sangma told reporters here after the meeting.
“Most political parties in the region are protesting against the bill in their respective states and so, we decided to come together and discuss measures to protect our people and the region,” he added.
On being asked about continuing in the NEDA, Sangma said it was premature to discuss political issues and they would “take a call if the situation arises. As of now, we have not come here to discuss politics but to address a very sentimental issue which concerns the people of the region”.
He pointed out that NEDA convenor and Assam Finance Minister Himanta Biswa Sarma was aware of the meeting, adding, “We are communicating with all as the primary responsibility of political parties is towards the people and the region.”
Asked whether a new regional alliance was in the offing in the Northeast, Sangma said, “We will take a decision at an appropriate time.”
He also refused to comment on whether the bill would be a defining factor in the upcoming Lok Sabha polls, saying, “It is premature to comment on it.”
“We are here not to make political statements but to discuss the issue and take the voice of the people to the government,” the NPP leader added.
The eight states of the Northeast account for 25 Lok Sabha seats and the ruling Bharatiya Janata Party (BJP) is eying to bag those in the Parliamentary election.
Referring to the meeting, Sangma said, “We spoke to each other over phone and decided to come together to oppose the bill in one voice and we hope that after today’s meeting, the Government of India will understand the sentiments of the people of the north-east.”
The meeting adopted five resolutions, including one for the unanimous opposition to the bill and another for a delegation comprising representatives of all the parties present to meet the president and the prime minister.
In the unfortunate scenario of the Centre failing to respond to the sentiments of the people, it was decided that the parties would continue to oppose the bill and meet again to chalk out the future course of action, Sangma said.
It was also decided at the meeting that a committee would be formed to reach out to all the political parties.
The meeting thanked all the political parties who “opposed the bill and supported our cause both inside and outside Parliament”.
“We are here to work with all political parties who are opposed to the bill and will reach out to everybody. This is not about politics but about people,” Sangma said, when asked whether they would reach out to the Congress, which is in the opposition in the states represented by the political parties at the meeting.
Mizoram Chief Minister Zoramthanga, who was also present at the meeting, said a resolution was adopted to unanimously oppose the bill, which was dangerous and harmful for the people of the Northeast.
AGP president Atul Bora said the meeting was “historic” as the political parties had unanimously decided to oppose the bill and ensure that it was not passed in the Rajya Sabha.
He hoped that all regional and other political parties would unitedly fight against the bill. (PTI)