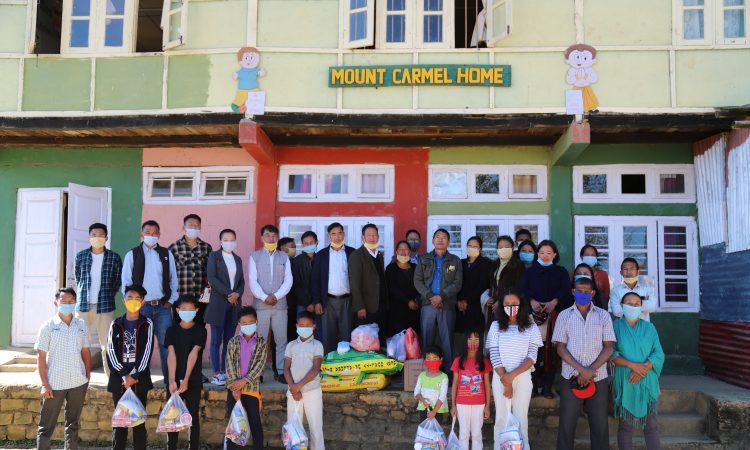 Dimapur, November 11: In celebration of the 70th birthday of Chief Minister Neiphiu Rio, all rank and file of NDPP Wokha Region visited Dr Motsuo Memorial Hospital, Wokha on November 11 and extended financial assistance to all the patients in the hospital as well as donated charity fund.

“With thanks giving to God for the auspicious occasion, and prayerfully beseeching His blessings upon the Chief Minister and the people’s leader, Mr. Neiphiu Rio, the party extended financial assistance to all the patients in the Hospital and donated charity fund as well, and held a mass spoken prayer with the officials,” said a NDPP Wokha release.
The NDPP Wokha Region thanked the management of Dr Motsuo Memorial Hospital Wokha for their permission and cooperation and TL Merry, general secretary and convener, CEB team in-charge NDPP Wokha Region for his contribution in making the celebration a success.
NDPP Wokha Region, Youth Organization led by its president, Amos Odyuo also visited the Foundling Harbour Orphanage Home and extended helping hand by donating essential commodities to the orphanage home and prayed for Rio good health, the release said.
Zunheboto: As per advisory issued by the party, the NDPP Zunheboto Region marked the 70th birthday of Chief Minister Neiphiu Rio with a daylong programme.
The commemoration was voluntarily organized not only by the NDPP Region but by all the 7 A/Cs of the region. Besides the NDPP workers, PDA partner, BJP district workers extended cooperation to make the even a success, said a NDPP Zunheboto release.
Highlight of the events were social work in all wards of Zunheboto town, decorative evergreen tree plantation with the DC’s official compound, distribution of free face masks, visit to Rochill Hospital Zunheboto and donating cash incentives to registered indoor patients, visit to Hezukhu Memorial District Hospital and giving help to the admitted patients through cash and cash incentives to Nurses Welfare Fund, and visit to Mt Carmel Home, an orphanage.
NDPP 5 Ghaspani-II A/C: In commemoration of the 70th birthday of Chief Minister Neiphiu Rio, the NDPP 5 Ghaspani-II A/C observed a Charity Day cum social work at New Indoor Badminton Stadium, Medziphema Town on November 11.
Addressing the gathering, Zhaleo Rio, IAS (Retd.), Advisor, Sericulture, Excise & Minority Affairs, who is also the local MLA, acknowledged everyone who came to participate and extend their yeoman service in commemoration of the birthday of Chief Minister Neiphiu Rio. He reiterated that members should always be guided by the party motto “Facta non verba” which demands more action and less words. He advised the gathering that “punctuality must be maintained at all cost if we are to succeed in our endeavours.”
On tree plantation drive, Rio noted that proper care must be accorded to the new plantations since its more or less offseason and urged the people, particularly the adjacent ADC office, to responsibly water and nurture them during the initial stages.
Earlier, Dosau Kuotsu, President, NDPP 5 Ghaspani-II A/C, who chaired the function, deliberated on the significance of the day as also the works to be undertaken on the occasion.
The function was followed by cleaning and plantation of tree saplings around the new Indoor Badminton Stadium, free distribution of masks and sweets, commemorative gifts for the old and elderly, etc.
15-SA-II NDPP: The 15th Southern Angami-II Assembly Constituency NDPP Unit held a function at Viswema village in commemoration of the 70th Birth Anniversary of Chief Minister Neiphiu Rio and donating solar street lamps to the seven villages of the constituency.
Speaking on the occasion, Advisor for Youth Resources and Sports and local MLA, Zale Neikha said Nagas need a strong and dynamic leader and politicians like Chief Minister Rio to lead the Naga people towards a bright future.
On this special day, Neikha while appreciating the NDPP 15th Southern Angami-II A/C for donating 70 solar street lights to the village people said as the light allows us to find ways in darkness, let our CM expose us to the path of truth.
Maintaining that Rio is one of the most successful politicians in Naga history, he wished that the good Lord blesses Rio with long life, good health, wisdom so that he continues to be a great example for the people.
The Head GB of Viswema village, Kevihopi Lcho on behalf of all the villagers pronounced traditional blessing for CM Rio’s prosperity and long life.
NDPP Kohima Region president Avio Tetso led in pasting the NDPP symbol on the donated solar street lights.
The program was chaired by Vizoto Kin, president 15-Southern Angami-II A/C while invocation was offered by Rev Avi Yongo, Pastor Victory Church of All Nation and a special birthday song was presented by Libemo and friends.